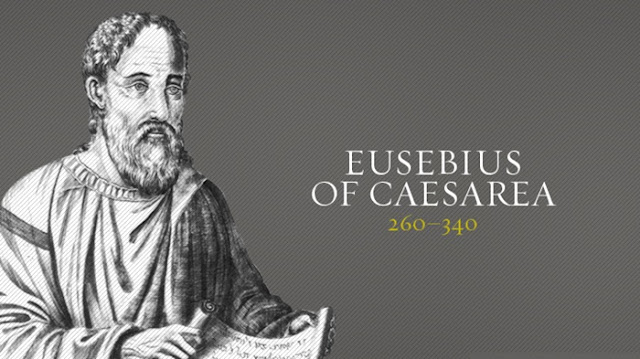 I am beginning a new occasional series of readings from and brief notes and commentary upon Eusebius of Caesarea’s The Ecclesiastical History (EH).I plan to read consecutively through the ten books, chapter by chapter, one chapter at a time. At the end of each chapter’s reading, I will offer a few observations on that chapter.

I have posted the first installment to sermonaudio.com, in which I present a brief biography of Eusebius. You can listen to here.

Who was Eusebius of Caesarea?

Eusebius of Caesarea (c. 260-340) was an influential bishop, writer, and historian, who has been called the “Father of Church History.”

A biography of his life was written by Ascius, his successor as bishop of Caesarea, but it is no longer extant.

Eusebius was born in Palestine c. 260. His parents and place of birth are unknown.

He is often referred to as Eusebius of Pamphilius. This recognizes his close relationship with Pamphilius, a noted presbyter in Caesarea, a student of Origen and founder of a large library at Caesarea. Eusebius may have been the son, nephew, friend, or servant of Pamphilius (Lake, x).

Eusebius fled to Egypt and was imprisoned there in 309, during the Diocletian persecution, which lasted c. 303-313. His mentor Pamphilius died as a martyr in 309.
He became bishop of Caesarea c. 315.

He was present at the Council of Nicea in 325 and served as “chief theological adviser to Constantine” (Lake, xi).

He was suspected of Arian tendencies, but he sided with the majority against Arius at Nicea as part of the “moderate” party. Still, he was a lifelong critic and opponent of the Athanasian party.

In 331 he was invited to become bishop of Antioch but refused the offer.

Though influential in church and politics “his literary achievements are his chief claim to fame” (Lake, xiii). Nevertheless his literary style has been described as “poor” (see Oxford Dictionary of the Christian Church, 481).

Among his many publications were Martyrs of Palestine (an account of the Diocletian persecution), Life of Pamphilius, Life of Constantine, Defense of Origen (with Pamphilius), Chronichon (a universal history with a table of dates), Onomasticon (on Bible names and topography), Preparation for the Gospel and Demonstration of the Gospel (apologetic works), as well as commentaries on Psalms and Isaiah. His greatest work, however, was his Ecclesiastical History or Church History in ten books, which tells the story of the Christian movement from the age of the apostles up to Eusebius’s own times. This is among the most important resources for understanding the early years of Christianity and earned Eusebius the title of being the “Father of Church History.” It is especially valuable, because the author draws upon much earlier sources and materials. It was likely produced in several editions as more material was added, with the work reaching its final form c. 323.

Lake points out that one manuscript of the EH adds this note:

“Beware reader, of being caught by the heretical tendency of the writer, for though this present book is peculiarly valuable as history, nevertheless though in some places he speaks unconditionally concerning God and attributes divinity in him, and here to some his opinions seem sound, yet in others he speaks of the Father and the Son and the Holy Spirit and everywhere represents the Son subordinate and secondary and the servant of the Father, for he was an Arian and guardedly manifests his opinions.”

Lake nevertheless observes, “In some ways he was the last and greatest of the Apologists….” (xvi).