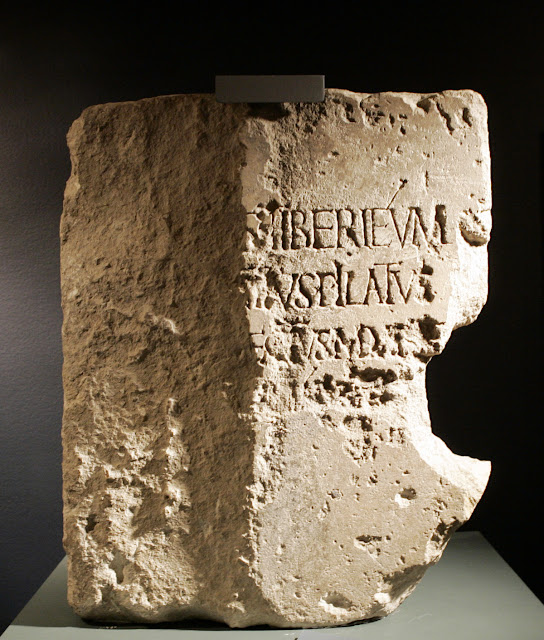 Image: The Pilate Stone, Israel Museum, Jerusalem. This damaged, carved limestone block was found in Caesarea Maritima in 1961 and dates to the first century. It includes the name of Pilate, Roman of governor Judea from AD 26-36 and the man who ordered Christ's crucifixion.

John 18:37b: Everyone that is of the truth, heareth my voice.

The Lord Jesus tells Pilate: “Everyone that is of the truth heareth my voice” (v. 37b). Christ is obviously not speaking merely about an audible voice. He is speaking here of those who receive the effectual call of God. Here is the mystery of divine election.

Paul puts it negatively in 1 Corinthians 2:14, “But the natural man receiveth not the things of the Spirit of God.”

How many people are looking for truth and never finding it, though it is right before them? How sad to see men seeking truth in spiritual dead ends. You won’t find it in a Buddhist prayer wheel, in self-help books, in rosary beads, in hedonism, in patriotism, in travel, in shopping, in recreation, or in anything else.

Several years ago the Washington Post ran a story about a world renowned violinist named Joshua Bell who took his 3.5 million dollar violin to a metro station in DC and offered an impromptu concert for free to those who passed by. The paper reported that this incredible gift was met by those who passed by with disinterest and boredom. Bell never drew a crowd, was not given a single instance of applause, and at the end of the day left with a paltry $32.17 (for this story, see Kruger, Canon Revisited, 147-148). The Post did not report this, but we might well imagine that someone could have asked Bell that day, What is music?

Friends, Christ is put before us today in his Word, read and proclaimed. He has said, “Everyone that is of the truth heareth my voice” (v. 37).

Will we recognize and acknowledge him to be the Way, the Truth, and the Life, that by him we might come to the Father?