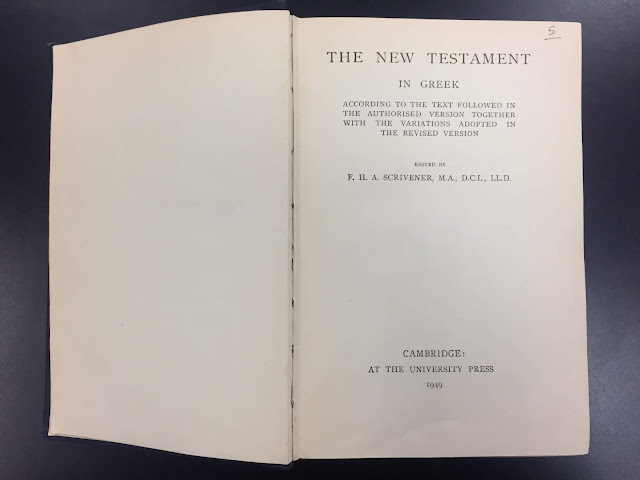 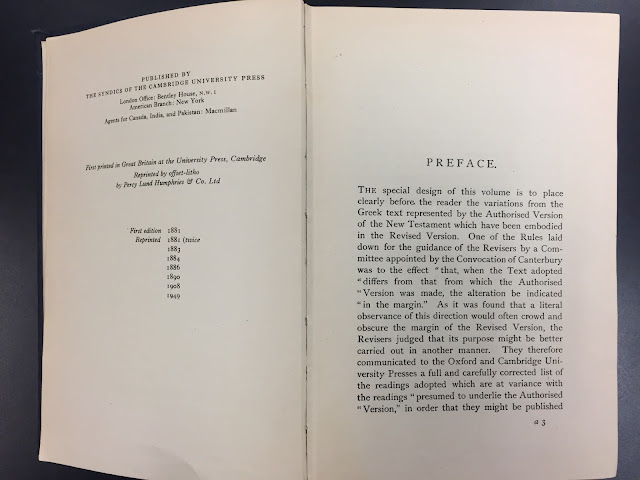 Related to discussion in WM 114 about Scrivener's Greek NT being based on Beza's printed TR of 1598, I have uploaded an audio version of Scrivener's Preface to The New Testament in Greek According to the Text Followed in the Authorized Version Together with the Variations Adopted in the Revised Version (Cambridge University Press, 1881, 1949): pp. v-vi. Listen to the audio here.

Interesting, the preface was written on Christmas of 1880. Scrivener's work must have existed earlier, and only that is was published in 1881. I can see via this preface how Edward Hills concludes that the KJV is not merely a translation of the TR but also a variation of the TR. Thanks for taking the time to read this, perhaps we can hear from you an analysis, sometime in the near future, no? Please say yes. Be well.

Thanks for the feedback Bill. I think Scrivener's point is to say that the KJV was not based on any one text but it was a "composite", though Beza's 1598 "was more likely than any other to be in the hands of King James's revisers, and to be accepted by them as the best standard within their reach."

As I'm sure you know, my interest in posting this was to clarify the nature of Scrivener's text in light of some misleading things that have been said about it by some modern text advocates, like JW.

Scrivener did not pull his text out of thin air or "back-translate" from the KJV but primarily followed Beza's 1598 Greek TR with some adjustments.

As the Preface also points out, he created this text to accompany the publishing of the Revised Version (1881) based on Westcott and Hort's modern text to illustrate the places where it departs from the KJV/TR.