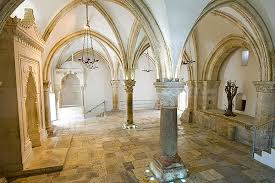 Image: The "Cenacle," a traditionally suggested site for the Upper Room in Jerusalem.

In his Expository Notes introducing John 17, J. C. Ryle observes: “The chapter we have now begun is the most remarkable in the Bible. It stands alone, and there is nothing like it.”

Calvin notes that “doctrine has no power, if efficacy be not imparted to it from above.” So, we learn here from Christ’s example here that the ministry of teaching (doctrine) must be accompanied by the ministry of prayer.

The prayer can be divided into three parts:

Christ’s prayer for future disciples (vv. 20-26). Christ prays for us! This anticipates his intercessory office in this age (Heb 7:25).

Throughout the Gospels Christ appears as a man of prayer. Typical is Luke 5:16 which says, “And he withdrew himself into the wilderness and prayed.”

So impressed were his disciples with Christ’s prayer life that they asked him to instruct them in this spiritual discipline. Luke 11:1: “And it came to pass as he was praying in a certain place, when he ceased, one of his disciples said unto him, Lord teach us to pray, as John also taught his disciples.”

Christ did indeed teach his disciples what we now call the Lord’s prayer or the model prayer (see Matthew 6:9-13).

And he taught them by example through his spontaneous prayers. Compare Christ’s spontaneous prayer at the return of the 70 disciples whom he had sent out: “In that hour Jesus rejoiced in spirit, and said, I thank thee, O Father, Lord of heaven and earth, that thou hast hid these things from the wise and prudent, and hast revealed them unto babes: even so, Father; for so it seemed good in thy sight” (Luke 10:21).

Christ even prayed for his enemies on the cross (see Luke 23:34).

Christ was a man of prayer, and we his disciples must “follow his steps” and be men and women of prayer also.

Nice one Jeff. Keep up the good work!

MJ, thanks for the encouragement. Hope you are well!

Defending the continued use of a 400+ year-old Anglican translation based on later, corrupted manuscripts (i.e. the "TR"), is absurd. Grow up.

yeoberry (Pastor Carpenter?), I'm supposing you meant to post this on the WM 114 post and not on this article relating to Christ and prayer.

Holding to the TR is "absurd." I respectfully disagree.

"Grow up." I'm trying, with God's help. I used to hold to the critical text, but part of my growth has been moving to the confessional text.

Has embracing the critical text aided you in your sanctification, in demonstrating the fruit of the spirit?

If you're in the Danville area, you're not that far away. Be glad to get together and discuss with you in person sometime.

Regarding the TR as a confessional text, have you taken a look at the prooftexts listed in the Westminster Confession of Faith and Second London Baptist Confession (1689)? Which text do they use? Look, for example, at chapter 2 on the Doctrine of God and notice the appeal to 1 John 5:7 (the Johannine Comma)? Take a look also at 1:8 of both confessions. What does this say about their view of Scripture? Is it the modern, reconstructionist view or is it something else (a preservationist view)?

Read the two articles on Scripture in volume 16 of John Owen's Collected Works. Take a look at William Whitaker's "Disputations on Holy Scripture." Then, move on to some modern works. Begin with volume 2 of Richard A. Muller's "Post Reformation Reformed Dogmatics." Then, take up Garnet Howard Milne's recent "Has the Bible Been Kept Pure." You might be surprised by what you find, especially if your previous exposure has only been to Calvinistic evangelical modern critical text proponents like D. A. Carson and James White, etc.

All the best, JTR