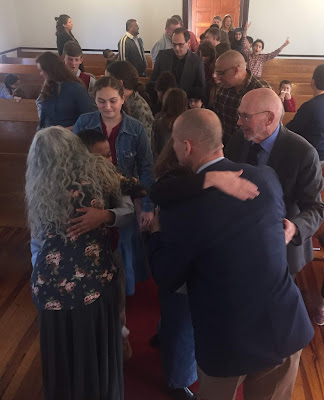 Note: Devotion taken from last Sunday's sermon on John 17:6-19.
And now I am no more in the world, but these are in the world, and I come to thee. Holy Father, keep through thine own name those whom thou hast given me, that they may be one, as we are (John 17:11).
In Christ’s High Priestly Prayer, the Lord Jesus prays especially for his original disciples, the apostles (see John 17:6-19).
In v. 11, Christ prays that the Father will keep the apostles, that is, that he will help them to persevere in the faith. He then prays that they will be given unity: “that they may be one, as we are” (v. 11b). He asks the Father to give the apostles the same unity that is enjoyed by the Father and the Son within the triune Godhead. He offers this petition for the original disciples, even as he will make a similar request for future generations of disciples later in this prayer (see v. 21: “That they all may be one….”).
Consider for just a second, how Christ’s prayer for unity among the apostles was answered by the Father.  After the death, burial, resurrection, and ascension of Christ, the body of believers was not divided into eleven or twelve different movements, but one movement. The apostles remained united in Christ.
Think about the opening chapter of 1 Corinthians when Paul says that he has heard that believers have been divided into factions, with some saying, I follow Paul, others saying, I follow Cephas [Peter], others, I follow Apollos [a gifted early teacher], and some, I follow Christ (see 1 Cor 1:12).
Paul’s response is brilliant. He does not say, Tell those who follow Peter to get in line and begin to follow me! No, he says, “Is Christ divided? Was Paul crucified for you? Or were you baptized in the name of Paul?” (v. 13).
Why were the apostles able to have unity? Because they did not want any glory for themselves, but they wanted to give all the glory to Christ alone. And they had this in answer to Christ’s intercession for them.
Christ prayed for unity among the apostles and that prayer was answered by the Father. May he continue to keep and to give unity to those of us who have come to believe in Christ through their word.
Grace and peace, Pastor Jeff Riddle