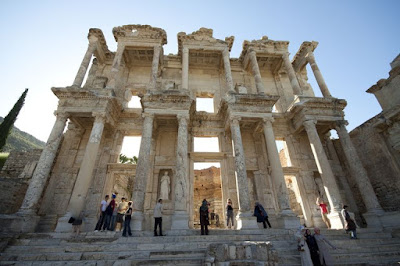 Image: Ruins of the Roman era Library of Celsus in ancient Ephesus.

I was continuing to read D. B. Hart’s translation of the NT yesterday and in Ephesians  3:3-4 I was struck by Paul’s reference to his previous writings to the recipients. This is a passage I had read before but not given much notice. Paul is discussing his special calling to make known the “mystery” of Christ. Here it is in the KJV:

Ephesians 3:3 How that by revelation he made known unto me the mystery; (as I wrote [from prographō] afore in few words,

4 Whereby, when ye read, ye may understand my knowledge in the mystery of Christ)

The question is what Paul is referring to when he speaks of what he had written before.

Was he speaking of the previous content found in the opening two chapters? This was Matthew Poole’s deduction: “As I wrote afore; in the two former chapters of this Epistle.”

An alternative possibility is that this refers to an earlier letter. Compare Paul’s reference in 2 Corinthians 2:4 to his previous “painful” letter to the church at Corinth and the various theories of 2 Corinthians being a composite of several letters suggested in the modern period. Consider also the reference in Colossians 4:16 to the "lost" letter to the Laodiceans.

Calvin could say in his time that this was “the general opinion”: “As I wrote a little before. This refers either to a rapid glance at the same subject in the second chapter, or—which appears to be the general opinion—to another Epistle.”

We might well ask what the writing was that Paul mentions in Ephesians 3:3-4? Was it what we might call "1 Ephesians", with what we know as “Ephesians” better considered as “2 Ephesians” [I am leaving aside the whole question about whether “at Ephesus” in Eph 1:1 belongs to the authentic text. I, of course, assume it does.]? Was it a letter or something else? A first-hand account of his conversion and calling? A sermon or doctrinal tract? Theologically speaking, one would assume that this “1 Ephesians”, whatever it was, was uninspired, or it would have been included in the canon. Or, could it refer to another inspired, canonical book, or portion of a book, shared with the Ephesians, in which Paul discussed these matters (Acts 9? Galatians 1-2? etc.)? I’m not sure we’ll ever be able to answer this question in this age.