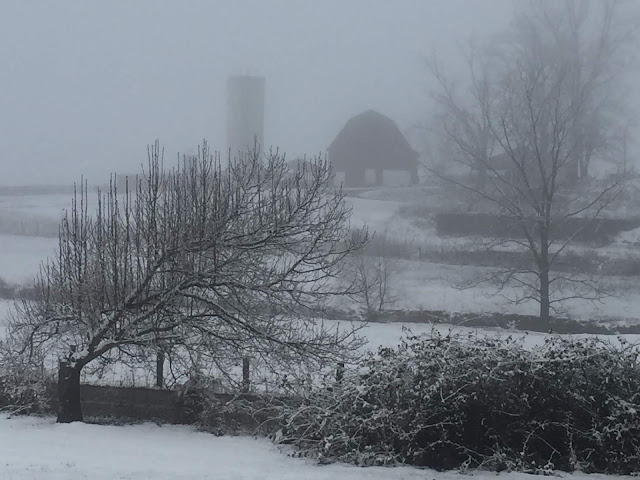 Image: North Garden, Virginia, January 18, 2019
Note: Devotion taken from sermon on John 17:1-5 from 12/30/18.
These words spake Jesus, and lifted up his eyes to heaven, and said, Father, the hour is come; glorify thy Son, that thy Son also may glorify thee (John 17:1).
We learn about fitting prayer through Christ’s actions and example as he begins his High Priestly Prayer (John 17).
His prayer was one spoken aloud: “These words spake Jesus….” There is a place for quiet prayer, for meditation, for speaking from the heart for only God to hear, but there is also a place for spoken prayer. Prayer is preeminently vertical, but when spoken aloud it is also horizontal, meant to exhort and encourage others. Christ spoke in this prayer to the Father, but he spoke also to his disciples.
And he “lifted up his eyes to heaven.” We usually think of prayer with eyes closed and head bowed, but Christ prayed with his eyes open and his head uplifted to the Father. Scripture gives warrant for many ways to express prayer. In Luke 18:13 Jesus says that the publican when he prayed, “would not lift up so much as his eyes unto heaven.” In 1 Timothy 2:8 Paul speaks of men praying everywhere “lifting up holy hands.”
Calvin notes that Christ’s posture indicates “an uncommon ardor and vehemence.” He adds that it was fitting for Christ to pray in this manner “for he had nothing about him of which he ought to be ashamed.”
Calvin also says that when we pray we should not be so much concerned with the “outward gesture” as “the inward feeling” which directs “the eyes, the hands, the tongue, and everything about us.”
Let us learn from Christ’s example in prayer, as in all things.
Grace and peace, Pastor Jeff Riddle