The Directory for the Publick Worship of God: Part 7 of 16 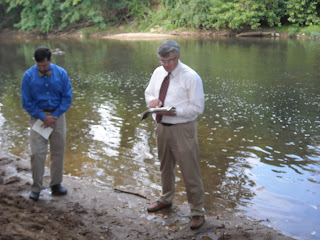 Image:  On the banks of the Rivanna River in Charlottesville reading texts on baptism.
Of the Administration of the Sacraments:

AND FIRST, OF BAPTISM.
BAPTISM, as it is not unnecessarily to be delayed, so it is not to be administered in any case by any private person, but by a minister of Christ, called to be the steward of the mysteries of God.