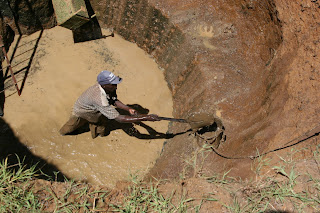 In Genesis 26 we read the account of Isaac receiving the covenant promise from God that had once been given to his father Abraham. The Lord told Isaac, “Dwell in this land, and I will be with you and bless you” (v. 3). The Lord then announced that Isaac’s seed would be “as the stars of heaven” and through him “all the nations of the earth shall be blessed” (v. 4).
As Isaac dwelt in the land of Gerar, among the pagan Philistines, he found that they had attempted to destroy the old wells dug by his father: “Now the Philistines had stopped up all the wells which his father’s servants had dug in the days of Abraham his father, and they had filled them with earth” (v. 15). Thus, Isaac set upon the task of digging again at the old wells: “And Isaac dug again the wells of water which they had dug in the days of Abraham his father, for the Philistines had stopped them up after the death of Abraham. He called them by the names which his father had called them” (v. 18).
This digging of old wells might well be taken as a picture of the spiritual task of our generation. There have been immense efforts to sabotage the old wells dug by our spiritual fathers. Our task is to clear away the rubbish and drink again from the old fountains of truth.
The old wells were dug by the saints of the past, first by the prophets and apostles. The water that came from those wells was the purity of the gospel, the authority of the Scriptures, the sovereignty of God. Romanism attempted to pour earth into the old wells, but that rubbish was cleared away during the Protestant reformation when one of the battle cries was ad fontes, back to the sources!
In the time since the Reformation forces have been at work to fill in those wells again. British Pastor John Thackway has suggested that among more recent forces have been ecumenism (the call to forget doctrinal distinctive in the name of cooperation); the new evangelicalism (the effort to bridge the gap between what some consider “embarrassing” fundamentalism and liberalism); and the modern charismatic movement (the call to follow experience rather than Scripture).
How do we dig again at the old wells?
• We look to the authority of the infallible Bible.
• We confess a faith that is clearly articulated and soundly defended.
• We preach boldly and clearly the doctrines of grace.
• We worship the Lord in Spirit and in Truth in a manner guided by the Bible and not the whims and “creative” ideas of man.
John Thackway, offers the following challenge:
To us is committed the great responsibility of reopening, guarding, and defending these wells. There will always be those keen to block them up again. Pure, divine truth is offensive and unpalatable to worldly and religious enemies alike. We must keep them open, dispense the waters, boldly declare these mighty and God-blessed verities; this is needed more than ever today if things are not to grow worse. And if it should please God to arise and breathe new life and power into the church; revival must come upon a people willing to do what is most likely to receive it, for revivals are usually characterized by the centrality of the Word (in his article “Reopening the Wells of Truth”).
May we be a church like Isaac, digging again at the old wells.
Grace and peace, Pastor Jeff Riddle
Posted by Jeffrey T. Riddle at 2:35 PM

As long as you dig up the fullness of it, not just to the depth and level that your comfortable with. Otherwise the same process will be repeated in another generation. Ephesians 4:12-13 is the goal!
P.S. Jesus is perfect theology!

Interesting comment. The question is not my "comfort" in the depth but the depth dictated by Scripture. Rather than Eph 4:12-13 as the goal, how about 1 Cor 10:31? Yes, Jesus is perfect theology but your implication is that theology is unimportant. What do you believe about Jesus? That is theology. We honor Jesus when we think rightly about him.