The Directory for the Publick Worship of God: Part 6 of 16 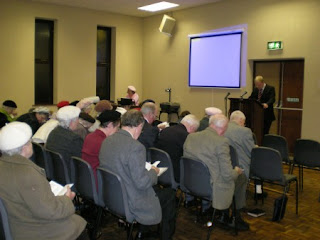 Of Prayer after Sermon.
THE sermon being ended, the minister is “To give thanks for the great love of God, in sending his Son Jesus Christ unto us; for the communication of his Holy Spirit; for the light and liberty of the glorious gospel, and the rich and heavenly blessings revealed therein; as, namely, election, vocation, adoption, justification, sanctification, and hope of glory; for the admirable goodness of God in freeing the land from antichristian darkness and tyranny, and for all other national deliverances; for the reformation of religion; for the covenant; and for many temporal blessings.
To pray for the continuance of the gospel, and all ordinances thereof, in their purity, power, and liberty: to turn the chief and most useful heads of the sermon into some few petitions; and to pray that it may abide in the heart, and bring forth fruit.
To pray for preparation for death and judgment, and a watching for the coming of our Lord Jesus Christ: to entreat of God the forgiveness of the iniquities of our holy things, and the acceptation of our spiritual sacrifice, through the merit and mediation of our great High Priest and Saviour the Lord Jesus Christ.”
And because the prayer which Christ taught his disciples is not only a pattern of prayer, but itself a most comprehensive prayer, we recommend it also to be used in the prayers of the church. And whereas, at the administration of the sacraments, the holding publick fasts and days of thanksgiving, and other special occasions, which may afford matter of special petitions and thanksgivings, it is requisite to express somewhat in our publick prayers, (as at this time it is our duty to pray for a blessing upon the Assembly of Divines, the armies by sea and land, for the defence of the King, Parliament, and Kingdom,) every minister is herein to apply himself in his prayer, before or after sermon, to those occasions: but, for the manner, he is left to his liberty, as God shall direct and enable him in piety and wisdom to discharge his duty.
The prayer ended, let a psalm be sung, if with conveniency it may be done. After which (unless some other ordinance of Christ, that concerneth the congregation at that time, be to follow) let the minister dismiss the congregation with a solemn blessing.
Comments and reflections: The sermon begins with prayer, and it concludes with prayer. It is suggested that the closing prayer reinforce the sermon so that the minister might “turn the chief and most useful heads of the sermon into some few petitions; and to pray that it may abide in the heart, and bring forth fruit.” The Lord’s Prayer is also recommended for use. The prayer after the sermon might be followed by the singing of a psalm, and the benediction (“a solemn blessing”). Prayer thus forms an inclusio for the entire service.
JTR
Posted by Jeffrey T. Riddle at 11:11 AM