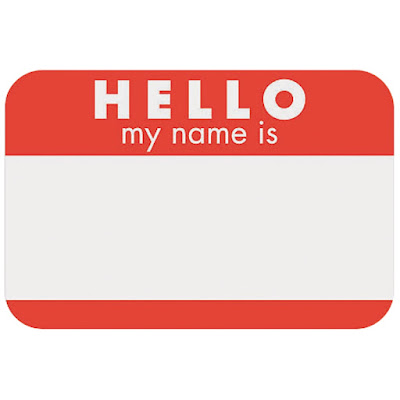 What’s in a name? Over the weekend, my opponent (James White-JW) protested publicly, during the second debate, and privately, in a brief conversation after that debate, that I had not called him by name during our exchanges.

In response to his complaint in our private post-debate conversation, after intentionally addressing him by name, I explained that there had been no malicious intent behind not using his name during the debate and referring to him most often as “my opponent.”

I explained that I had refrained from using his name for two reasons:

First, it was a rhetorical strategy to de-personalize the substance of the debate. This was not a personal conflict between me and my opponent but a question about the text of Scripture.

A friend recently pointed me to the guidelines for “Debate Decorum” on Robert’s Rules of Order online, which states the following under point 43 (underline added):

43. Decorum in Debate. In debate a member must confine himself to the question before the assembly, and avoid personalities. He cannot reflect upon any act of the assembly, unless he intends to conclude his remarks with a motion to rescind such action, or else while debating such a motion. In referring to another member, he should, as much as possible, avoid using his name, rather referring to him as "the member who spoke last," or in some other way describing him. The officers of the assembly should always be referred to by their official titles. It is not allowable to arraign the motives of a member, but the nature or consequences of a measure may be condemned in strong terms. It is not the man, but the measure, that is the subject of debate.

Second, it was also meant to be a humorous inside joke for those in the TR camp and others who have followed our past interactions. I explained to JW that for several years on his DL podcast it had been noticed that he had a tendency not to mention my name directly and the names of several others who had critiqued him. As a result, we began talking about using the “Voldemort Principle” (“he who shall not be named”) when discussing JW. No harm was intended.

We found creative ways to refer to JW, like “an apologist in Phoenix” or “a cyclist who dabbles in apologetics.” Yes, this continued in the Text & Canon Conference in Atlanta in October 2019, where we generally avoided referring to JW by name, though we did do so a few times (even if it was a slip up). There has never been a formal rule to avoid his name but only an informal practice.

Later, in a few blog posts and WM podcasts I began to refer to JW as the “Popular Internet Apologist” or PIA for short.

After I explained this to JW in our post-debate conversation, his response was to say that he had never avoided using my name or anyone else’s name on the DL. I was a little stymied by that response since that was not my recollection, but I again assured JW this was not meant to be taken as malicious but in good humor.

I am addressing this in a public blog post, since JW mentioned it publicly in the debate, several folk made mention of his complaint in post-debate comments I read or heard, and Samuel Nesan (and his panelists) also made glancing reference to our off-air conversation during his post-debate review [see the 58:53 mark for comments on our post-debate conversation; and the 10:43 mark for Samuel’s views on our pre-debate meeting].

For the record, in light of this expressed sensitivity, I do plan to use JW’s name, if (when) I respond to him in the future. I don’t desire to swerve into “foolish talking” or “jesting” that is “not convenient” (Eph 5:4) or “vain jangling” (1 Tim 1:6; one of my favorite AV phrases!). I also want to it be known that every-once-in-a-while I might also refer to him by a circumlocution, whether by intention or by chance. If I should do so, I hope it will not necessarily be interpreted as coming with malicious intent.

Bicycles need a squirt of WD40 to stop whining. A defeated man could use a lick of Laphroaig for the same ailment. Our PIA could use a full cask.

I really enjoyed the debates. Thank you Pastor for persisting to make them happen.

The fact that such a trivialities is JW's biggest complaint makes it look more like a distraction or a red herring than anything else. The short observation is that White claims to be objective and scientific while the TR position is confessional. But as Dr. Riddle pointed out on Word Magazine, JW took a confessional view when debating Bart Ehrman and was consequently crushed by the scholarship, to which JW had no coherent response. One glaring logical mistake by Ehrman was his claim that he knew what words were missing from a manuscript simply by the size of the papyrus page, the size of the handwritten script, and counting letters and words. But isn't this an argument from silence? How did Ehrman know that spelling errors or word order or omissions and additions did not occur in the missing part of the papyrus or parchment? Liberal critics seem to be clairvoyant. Yet James White never challenged Ehrman on ANY of his logical fallacies of this order throughout the debate 10 years ago. Might I suggest that JW needs to study logic more closely?

I would like to ask you about the end of the mark 16: 9-20. I believe that Mark's ending is additional. Not the original writing of Mark. But I believe and accept it as the inspired word of God. which answered my question. Verily who added part of the text of Mark 16: 9-20, what is his name.

It is a common tactic of a biased moderator and "set up" debate by the opposing side to base everything on their terms and conditions so as to get maximum leverage and mileage. The question must be asked though for Xn (Christian) debates is what does God's word say about the matter. So, when the opponent cries fowl, well what saith the scriptures? "Ernestly contend for the faith once which was once delivered unto the saints." We must ask ourselves what does this look like in practice? J MacArthur (I do not agree with his position and agreement with the modern critical text and or his pre trib dispensationalism) says on Jude 3 - "Jude wrote this urgent imperative for Christians to wage war against error in all forms and fight strenuously for the truth, like a soldier who has been entrusted with a sacred task of guarding a holy treasure...and to be willing to confront and attack error...It is the responsibility of believers now to study the word (2 Tim. 2:15), preach the word (2 Tim. 4:2), and fight for its preservation." Pastor Jeff, thank you for your defense of the faith once delivered! I've watched many debates with JW and both JW and the opponent got fired up and dished it out, so there is a time and place esp, when we consider, Be ye angry, and sin not:" Yes, there are Xn graces which you exhibited well in our Lord's grace, and there is a righteous anger too which must be exhibited too at the right time and place, which I believe you did too. Once again, thank you Pastor Jeff, and may our Lord enable you to fight the good fight with all of your might in your blogs, debates, in the world and in and for the church.

Septextura, I had to look up "Laphroaig" to get your point. Smiles.

Charlie, thanks for the comment. Good to talk to you the other day.

David, thanks for the comment. Not sure I follow your point. Who wrote Mark 16:9-20? I say it's pretty simple. Mark did. As noted elsewhere, if you think Mark 16:9-20 is not original, then you have to say that Mark was incomplete or the original ending was lost, which undermines Mark's integrity and divine preservation. If you say Mark was originally meant to end at Mark 16:8 you have to explain how it ends with "gar" and no resurrection appearances.

Mark, thanks for the encouragement. Yes, it is hard sometimes to strike the balance between being charitable and being firm in defense of the faith. On one hand the "name" protest seems like a distraction. On the other, there seemed to be a real personal sensitivity there.

I believe that Mark's end is the inspired word of God. But I don't believe Mark's ending is Mark's writing. The reason is that there are some new words appearing in the end of mark which were never used by markus. Even if the story line doesn't continue. Maria Magdalena is mentioned again as if she had not been introduced. Pahadal if we see it has been mentioned in chapter 16: 1

David, these so-called "internal" arguments based on vocabulary, style, syntax, context (e.g., Mary Magdalene, v. 9), etc. have been studied and refuted by those who hold that Mark 16:9-20 is original.

If you want to read about them in detail, see the chapter by Maurice A. Robinson, "The Long Ending of Mark as a Canonical Verity" in David Alan Black, Ed., Perspectives on the Ending of Mark. In that chapter Robinson points out, for example, that of the 166 word in the TE 154 (92.7%) have some parallel elsewhere in Mark. He also cites several studies where scholars have compared Mark 16:9-20 with other passages of twelve verses in length in Mark and finds that it is not different than them in grammar, unique vocab, etc.

For a defense of the ending of Mark overall (including both external and internal evidence), see Nicholas Lunn's The Original Ending of Mark.

I appreciate that you have a different opinion with me. You have proof to say that it is Markus Yulisan. But I also have proof that it is not Mark's original writing.We can see in the writings of William M Metzger, William Hendriksen Daniel B Wallace, Donald Guthrie. basically there is some vocabulary at the end of the text markus not never used by markus, the language style is very different.we have different opinions. although I say it is additional but I consider it the word of God inspired by holy spirit.