Was the mature Van Til a "TR Onlyist"? 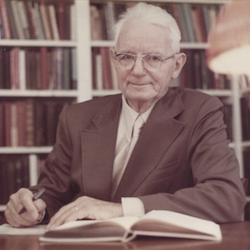 The article begins: "The Christian philosophy of Dr. Cornelius Van Til was a major influence in my acceptance of the Textus Receptus as the authentic text of the Greek New Testament."

McShaffrey shares this illustration: "a man’s presuppositions are like a pair of eye-glasses through which he sees all things. The glasses of belief enable him to see reality as God has defined it through revelation. The glasses of unbelief blind him to reality and make all rationality ultimately impossible. There is, of course, a spectrum of lenses between the two extremes."

He also discusses an anecdote that has appears in a recent collection of articles from Rushdoony which suggests that late in life Van Til embraced the text position of E.F. Hills as consistent with his own apologetic method.

This is the real front lines on which to wage the Scriptural text battle.

Text presupposition and "worldview" IS the fountainhead. Text details are wholly subordinate though always forefront and king in the Critical Text / Reasoned Eclecticism school. The way I think of it from the Pew is like this: I see over there a very big and daunting physical rock. The detail is the big physical rock. The presupposition or worldview is Evolution or Creationism (more or less) or Reason (mans "judgement consensus") or divine Faith (which itself has inherent evidence, Heb 11:1). The story of the big physical rock is really just presuppositional detail communicated, nothing more.

Does one believe the Text is corrupted and thus needs to be reconstructed to an approximation by the judgement of man, a text that is thus always in possible flux (i.e. as we saw when logically pressed in the recent Riddle/White debate)? Or, is the text of Scripture immediately inspired by God, and by His singular care and providence kept pure in all ages, and are therefore authentic, as the Scripture and the Confessions assert?

Thanks for posting his Dr. Riddle and for Pastor Christian McShaffrey's blog at https://www.fivesolas.church/cornelius-van-til-and-the-textus-receptus on it!