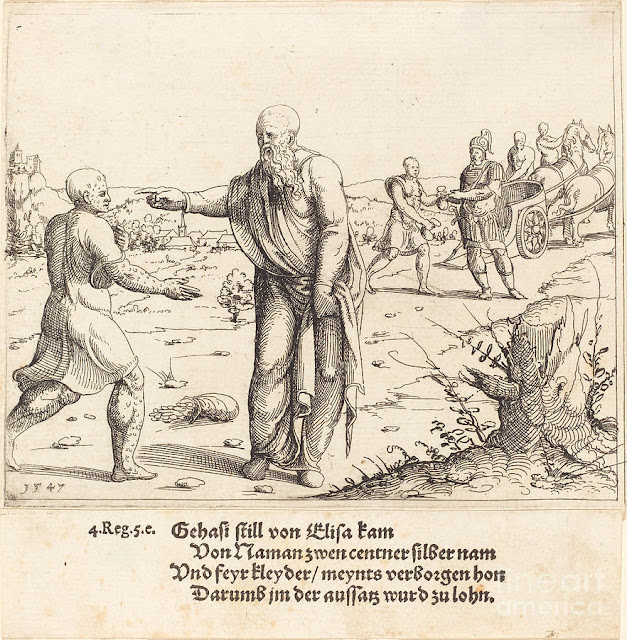 Gehazi is an intriguing character in the Biblical narrative. He was a man given incredible privileges and advantages. He was the servant of the prophet Elisha. But sin crouched at the door, and Gehazi squandered all the advantage he had been given.

His demon, as it were, was lust for material gain. He lied to Naaman in order to get silver and raiment for himself.

The apostle Paul warned Timothy that “the love of money is the root of all evil; which while some coveted after, they have erred from the faith, and pierced themselves through many sorrows” (1 Tim 6:10).

There are modern day Gehazis in the church. For every Gehazi, however, there is a day of reckoning.
Gehazi perhaps thought no one knew what had happened. He got away with it. But we all know that you cannot fool God. Numbers 32:23 says, “And be sure, your sin will find you out.”

Cain found this out when he struck down his brother, and the Lord asked, “What hast thou done?” (Gen 4:9).

Saul found this out when he kept back the best of the flocks and the spoils of the Amalekites, until the prophet Samuel confronted him, saying, “What meaneth then this bleating of the sheep in mine ears, and the lowing of the oxen which I hear?” (1 Sam 15:14).

Ahab found this out when he took the life and vineyard of righteous Naboth, and Elijah confronted him, saying, “I have found thee: because thou hast sold thyself to work evil in the sight of the LORD” (1 Kings 21:20).

And Gehazi had his moment of reckoning too.

Contrast Gehazi with Charles Spurgeon, one of the most popular and prolific preachers and writers of the Victorian era, whose printed sermons and books sold millions, which would have made him a millionaire. It is said, however, that when he died, he left behind only a small sum. Why? Because he had given almost everything he had made to Christian causes, to his church, to a college for training pastors, to an orphanage, to an almshouse, to a book ministry, and others.
We should be like Spurgeon, not Gehazi.
Know that God is omniscient (all-knowing). Know too that he is a God of justice. Fear him. Let us learn from this inspired narrative, and let us also remember that there are worse punishments than merely temporal ones.

Thanks Pastor Jeff, a good exhortation, warning and encouragement indeed.