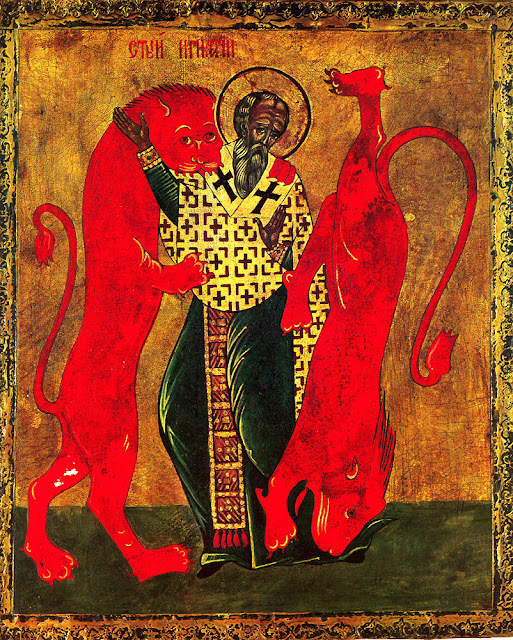 Image: Russian icon, tempera on board, c. 17th century, depicting the martyrdom of Ignatius of Antioch

A new episode is posted to the series on Eusebius of Caesarea’s The Ecclesiastical History: book 3, chapter 36. Listen here.

This chapter makes reference to some of the so-called Apostolic Fathers, the first generation of church leaders after the time of the apostles.

He first mentions Polycarp of Smyrna, appointed “by the eyewitnesses and ministers of the Lord.”

Next, he mentions Papias of Hierapolis.

And finally, he notes Ignatius of Antioch, the second after Peter to serve as bishop of Antioch.

He recalls the account of Ignatius’s martyrdom in Rome and the seven letters he wrote from Smyrna and Troas, as he made his pilgrimage.

Eusebius notes Ignatius’s zeal for martyrdom and his refutation of heresy, like Docetism (the rejection of the true humanity of Jesus).

Irenaeus also describes Ignatius’s martyrdom and Polycarp calls attention to it in his epistle to the Philippians.

Finally, he notes that Heros succeeded Ignatius as bishop of Antioch.

This chapter thus focuses on post-apostolic leadership from men like Polycarp, Papias, and Ingatius, and of the glory of an early martyr, Ignatius of Antioch.

Labels: Eusebius of Caesarea, Ignatius of Antioch, Polycarp of Smyrna