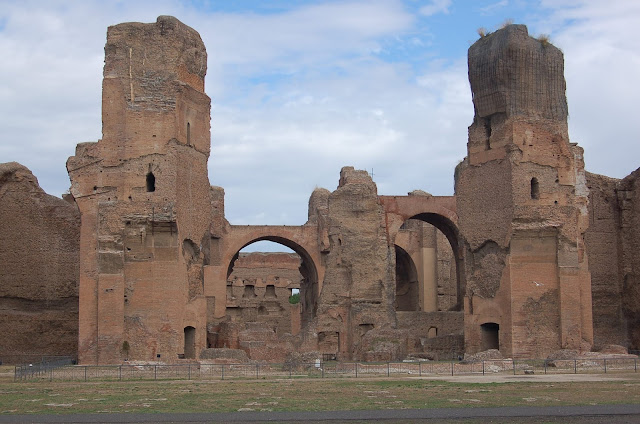 Image: Ruins of the Baths of Carcalla, Rome, Italy. These baths were completed c. AD 217 but may be like the one where John supposedly fled from Cerinthus.

A new episode is posted to the series on Eusebius of Caesarea’s The Ecclesiastical History: book 3, chapters 28-30. Listen here.

In these chapters Eusebius continues to trace heresies of the early post-apostolic era:

In chapter 28, he discusses the Gnostic teacher Cerinthus, citing several early Christian sources on Cerinthus, including:

Gaius who said that Cerinthus wrote a book in the name of “a great apostle” in which he says there will be a marriage feast that will last “a thousand years.” Lake: “It would appear that Gaius thought that Cerinthus was the writer of the Apocalypse.” If so, this would show controversy over the canonicity of Revelation and chiliastic or millenarian views.

Dionysius of Alexandria describes him as founder of the Cerinthian heresy and also disparagingly mentions his teaching that “the kingdom of Christ would be on earth.”
Irenaeus is cited as conveying a tradition from Polycarp of Smyrna of how the apostle John fled from a bath when Cerinthus entered, fearing it would fall in, because “the enemy of truth” had entered.

In chapter 29, Eusebius discusses the Nicolaitan heresy (cf. Rev. 2:6, 15). He notes that these traced themselves to the Nicolas among the seven servants in Jerusalem (Acts 6:5).

For a source he cites Clement of Alexandria, who conveys a tradition that Nicolas had a beautiful wife he offered to others out of jealousy, suggesting he was a libertine. Eusebius, however, suggests the opposite, that he gave up his wife because he was an ascetic, as was Matthias.

In chapter 30, Eusebius continues to draw upon Clement of Alexandria who countered those who rejected marriage by looking to the examples of the married apostles and apostolic associates, who were husbands and fathers, mentioning Peter, Philip, and Paul. He also conveys a tradition that Peter exhorted his wife when she was being led to her death by saying, “Remember the Lord.”

Conclusion: Again, we see that the formation of orthodox belief and practice is fleshed out through distinction from heresies.