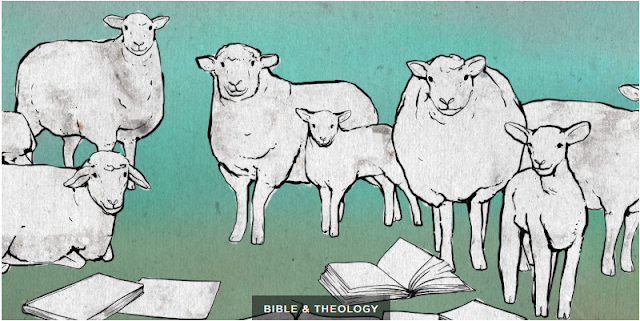 When illustrating the differences between the modern and traditional text of the NT the doxology of the Lord’s Prayer (Matt 6:13b) proves an important example, since this passage is so well known and loved in liturgy and personal piety.

The key questions: What did the Lord Jesus teach his disciples to pray? What did Matthew record when he included this prayer in his Gospel in the Sermon on the Mount?

Part One: An email exchange on the Doxology of the Lord’s Prayer (Matt 6:13b):

Back on March 31 a listener wrote (exchange slightly edited):

I was wondering if you have done anything like a podcast on the ending of the Lord’s Prayer?

I was in a conversation the other day with someone from church and the authenticity of the ending of the Lord’s Prayer came up.  They said “it’s not in Erasmus”

I just said well I didn’t know that and that is interesting.

I wasn’t really looking for a debate.

I do see it in almost all the printed texts it seems from Beza, Steph.... but…I don’t see it in Erasmus from what I can tell at least.

But all my old Reformed commentaries have it from John Calvin to John Gill.

My response (a month later on May 1):

Sorry to be so long in getting back.

I'd love to do a WM on Matt 6:13b sometime. Hopefully, I'll get to it eventually.

I checked my digital copy of Erasmus's first edition (1516), and it is there in both Greek and Latin. I'll attach a picture.

You may know that the doxology also appears in the Lord's Prayer when cited in chapter 8 of the Didache (but omitting "the kingdom"), which dates to c. 100, so it is the earliest attested reading.

To which he responded the next day (May 2):

Thanks for the response. It does help.

Oddly it was my Pastor that said it wasn’t in Erasmus. He probably just heard someone blabbering nonsense about the ending one day. There is so much! bad information out there on this issue of the text.

Have a great day

Part Two: Tyndale and the Doxology of the Lord’s Prayer (Matt 6:13b):

I thought of that exchange recently when someone pointed me to a blog article on text criticism that appeared on the Gospel Coalition website on April 11, 2019. The article is by Justin Dillehay, pastor of Grace BC in Hartsville, TN, and titled “4 Ways to Shepherd Your Flock Through Textual Variants” (read it here), and it also addresses the doxology of the Lord’s Prayer (Matt 6:13b).

In the article he makes reference to Tyndale’s omission of Matt 6:13b in the first edition of his English Bible (1526).

So, I wondered if the earlier writer’s pastor had confused Tyndale with Erasmus (or the if the writer had confused his pastor’s words).

I also wanted to be sure this was factually accurate, so I checked a digital copy of Tyndale’s 1526 online, and it does, indeed, omit Matt 6:13b. Here is an image from Tyndale's 1526 NT: 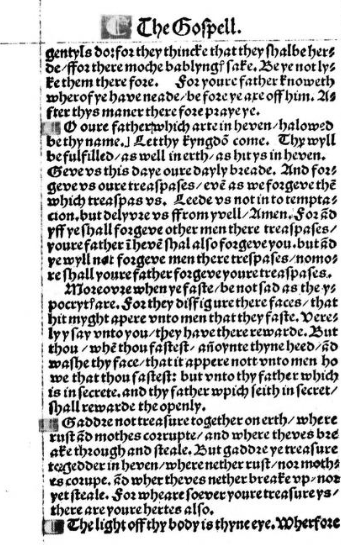 I then, however, checked my copy of David Daniell’s modern spelling edition of Tyndale's 1534 NT (Yale, 1989, 1995) and found it includes the doxology: “For thine is the kingdom and the power, and the glory for ever. Amen.” So, I searched for a digital copy of the original of Tyndale's 1534 NT also: 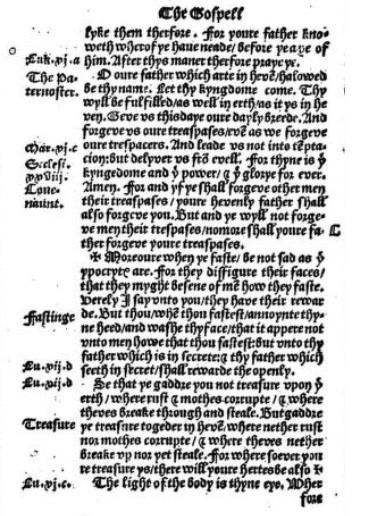 In his introduction to his edition of Tyndale’s 1534 NT, David Daniell writes:

We are left to ponder why Tyndale omitted Matthew 6:13b in his 1526 edition. It is possible that he did so in order to bring his translation of the prayer into conformity with the Latin Vulgate which also omits it. This is one of many examples  of places where the modern critical text adopts readings in line with the Vulgate. The Clementine Vulgate concludes the Lord’s Prayer: “Et ne nos inducas in tentationem. Sed libera nos a malo. Amen.” (Matt 6:13). The Lord’s Prayer which includes the doxology might therefore be considered a distinctively Protestant understanding of the prayer.

It is important to remember that it was the 1534, not the 1526 edition, which is considered to be Tyndale’s “greatest work.” The fact that he omitted the doxology of the Lord’s Prayer in the preliminary 1526 NT, therefore, should not be used as a justification for its omission today, especially since upon later consideration Tyndale determined to include it.

Part Three: A Brief Look at the External Evidence:

In support of the modern critical text’s omission: Sinaiticus and Vaticanus, along with D, Z, 1070, family 1, Lectionary 2211. Among versional support we have the Latin tradition, Middle Egyptian (Mesokemetic), and some Bohairic Coptic mss. Among the Fathers Origen is cited.

In support of the traditional text we have K, L, W, Delta, Theta, family 13, 33, etc. and the Majority tradition. Among the versions we have some individual Latin mss. like f and q, the Harklean Syriac, some Boharic Coptic mss., etc.

Most interesting is the reading in chapter 8 of the Didache (c. 100) which includes the doxology but omits “the kingdom” reading: “thine is the power and glory forever.” It also omits the “Amen” and is followed by the injunction: “Pray thus three times a day.”

The NA 28 puts a thumb on the scale by prefacing the textual variants by a reference in parenthesis to the prayer of David in 1 Chronicles 29:11-13. The implication apparently being that later scribes would have tried to make David’s doxology part of the prayer of Jesus, the Son of David. But this begs the question as to whether Christ himself appropriated these words in order intentionally to echo David.

NA 28 also adds to the apparatus an obscure variant from the fifteenth century ms. 1253 which reads: “for thine is the kingdom of the Father, and of the Son, and of the Holy Spirit forever. Amen.” This suggests that the ending was malleable and open to orthodox “improvement.” But the ending in 1253 is clearly late while the doxology is very early (cf. Didache, W, etc.).

The doxology (including the Amen) is the fitting ending to the Lord’s Prayer. It’s appearance in the Didache proves it to be the earliest attested reading. Clearly, it is not a late development. It was the reading affirmed in the majority of Greek manuscripts, including some of the earliest age (like W) and is only excluded by a handful of Greek mss. Though omitted in the Latin tradition, it was nevertheless, preserved in the West, with the printing of the TR and distinctively affirmed by various Protestant translations, including Tyndale’s definitive 1534 English translation.

The Completensian Polyglot GNT (1514) omits the doxology at Matt 6:13b. The CP isn't slavishly devoted to the Latin Vulgate either. It has many differences between the Greek and the Latin.

AJ, interesting. I'll check out the CP here. Given that the CP is an RC scholarly venture it may not be surprising that it omits the doxology (in line with the Vulgate). This does, however, make Erasmus' inclusion of it in 1516 all the more striking. Maybe the CP influenced Tyndale? I don't know.