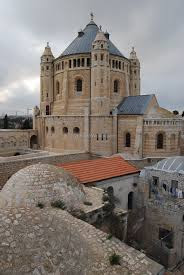 Image: Modern view of traditional site (since Middle Ages) of David's tomb in foreground with the Benedictine Abbey of the Dormition in background, Jerusalem.

We began last Sunday at CRBC a new Lord’s Day morning sermon series through the book of 1 Kings.

It is important for us to return from time to time to the Old Testament. This too is part of our Bible and, as Paul wrote, “All scripture is given by inspiration of God, and is profitable for doctrine, for reproof, for correction, for instruction in righteousness: that the man of God may be perfect. Thoroughly furnished unto all good works” (2 Tim 3:16-17). This is part of God’s word, and so it is for our profit.

1 Kings is a historical work. It continues the history of Israel’s kings that had begun in 1-2 Samuel (with the prophet Samuel and the kings Saul and David) and is continued by 2 Kings.

If we think of the books of 1-2 Kings as one book, we can divide it into three sections:

We call it the book of Kings, because it tells the history of Israel largely through her rulers, from King David on his death bed in 1 Kings 1, to King Jehoiachin of Judah, living in exile in Babylon in 2 Kings 25:27-30.

But it is also the story of God’s prophets, including Nathan, Elijah, and Elisha.

The author is never directly named. We might call him the historian. He lives during the time of the exile, since this is the last thing he records in 2 Kings.

Whoever the human author was, we know he was inspired by the Holy Spirit. The Spirit is the true author of 2 Kings, as all of Scripture.

One of the questions we will come back to throughout this series will be: Where is Christ? How are we pointed toward Christ?

May we learn more of Christ as we work out way through 1 Kings.