Eusebius, EH.2.23: The Piety and Martyrdom of James the Just 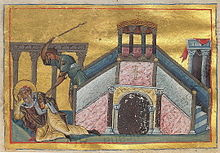 Image: A depiction of the martyrdom of James the Just in the Menologian of Basil II, an illuminated liturgical manuscript, c. AD 1,000.

A new episode has been added to the series on Eusebius of Caesarea’s The Ecclesiastical History: book 2, chapter 23. Listen here.

This chapter draws on several sources (Clement of Alexandria, Hegessipus, and Josephus) on the life, ministry, and death of James the “Just”, the brother of the Lord.

James is described as having been allotted by the apostles “the bishopric in Jerusalem.”

He is said to have been put to death during the transition of the Roman governorship from Festus (who had died) to Albinus.

James is described as having reached great heights of righteousness through study of religion and philosophy.

According to Hegessipus his knees were hardened by his constant kneeling in worship and prayer.

He was called “the Just” or Oblias, which is interpreted as “a rampart of the people and righteousness.”

His death is described in detail. He was taken to “the battlements of the temple” to explain “what is the gate of Jesus”, but when he confessed Jesus he was thrown down and began to be stoned. James is said to have prayed for his attackers (as Jesus did in Luke 23:34). His life was finally taken when he was struck with a laundryman’s club.

He is said to have been buried by the temple, and it is noted that his unjust death was believed by Christians and Jews to be the reason for the Roman siege of Jerusalem which soon followed.

Josephus’s account is cited as laying much of the blame for James’s death on the machinations of the high priest Ananus.

At the close of the chapter Eusebius notes that the first Catholic epistle is attributed to James but that its authenticity is denied, as is the epistle of Jude, which is also among the seven catholic epistles. Despite the challenge to the authenticity of these works, however, Eusebius notes they “have been used publicly with the rest in most of the churches.” Here we see the organic process of canon recognition at work.