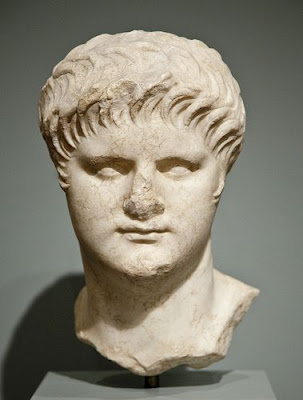 Another episode has been posted to the series on Eusebius of Caesarea’s The Ecclesiastical History: Book 2, chapters 24-26. Listen here.

These final chapters of book 2 focus on the atrocities of the Roman Emperor Nero against both Christians and Jews.

Chapter 24 is a brief note on how Annianus succeeded Mark the Evangelist in Alexandria during Nero’s time.

Chapter 25 goes into greater detail as to Nero’s cruelty. Aside from his treacherous behavior toward his own family he is described as “the first of the emperors to be pointed out as foe of the divine religion.” Here he cites Tertullian.

He further describes Nero as “a fighter against God” and as one who slaughtered the apostles.

Eusebius conveys the tradition that Paul was beheaded and Peter crucified in Rome by Nero at the same time.

He cites an early Christian writer named Caius who describes “the sacred relics ofn the apostles” deposited in Roman cemeteries associated with Peter and Paul near the Vatican or Ostian Way.

He also cites Dionysius bishop of Corinth as confirming that Peter and Paul were martyred at the same time in Rome.

Chapter 26 also notes Josephus’s record of the persecution of Jews by Florus, procurator of Judea, during the twelfth year of Nero’s reign in the early days of the Jewish revolt.