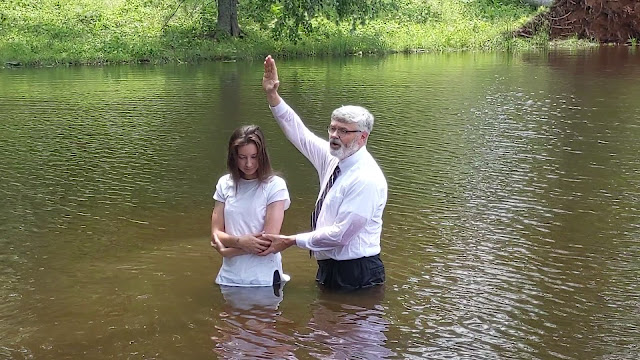 Image: Five young believers confessed "Jesus is Lord,"  were baptized, and admitted to membership and the Lord's table at CRBC last Sunday (6.2.19).

Note: The devotion is taken from last Sunday's sermon on John 21:20-25. This message was the ninety-first and concluding sermon in a series through the Gospel of John which began on May 21, 2017 with a sermon on John 1:1-5. Listen to the complete series here.

This is the disciple which testified of these things, and wrote these things: and we know that his testimony is true (John 21:24).

Some have held that the apostle John completed his writing of this Gospel at John 21:23 and another inspired author penned the last two verses retrospectively (vv. 24-25). One extra-biblical tradition suggests that John had a scribe named Prochorus and that he perhaps wrote these final words.

I am more inclined, however, to think that John is the human author of every word in this Gospel. Here, under the guidance of the Spirit, he simply wrote of himself in the third person, just as Moses described even his own death in Deuteronomy 34.

John tells us here that he is the beloved disciple, the author of this Gospel. And more importantly he tells us that what he has written is true.

This testifies not only to the inerrancy (“truth without any mixture of error”) and infallibility of Scripture generally but also to the truth of this Gospel in particular. Its witness to Christ and all he said and did is true.

In his High Priestly Prayer Christ prayed for his disciples, “Sanctify them through thy truth: thy word is truth” (17:17).

Pilate cynically asked Christ: “What is truth?” (18:38). And John here answers: Christ is truth. His word is truth. This Gospel is truth.

In the end, John wants us, the readers, to know that this is truth. This is not some fanciful concoction of a deluded mind, but the reality of realities. His testimony is true.