Eusebius, EH.2.7-9: The Death of James the Apostle 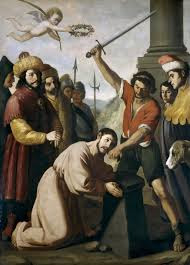 Another installment has been added to the series on Eusebius of Caesarea’s The Ecclesiastical History: Book 2, chapters 7-9 (listen here).

In chapter 7 Eusebius relays a tradition that Pilate committed suicide and that this came as a penalty from God.

He mentions a source (the records of the Olympiads of the Greeks) but Lake notes, “No extant records confirm this statement.”

In chapters 8-9, he summarizes material taken from Acts chapters 11-12.

This includes events that happened under the reign of the emperor Claudius, including the famine foretold by the prophet Agabus.

He also relays the account of the death of James the apostle under Herod from Acts 12:1-2 and adds an account from Clement about a soldier who was converted during James’s trial and who was executed with him.

He notes also the arrest of Peter from Acts 12.

We see here again Eusebius’s use of Acts as a trustworthy source and his supplementing of it with extra information. We see also his desire to set the Christian movement against the wider backdrop of Roman history.