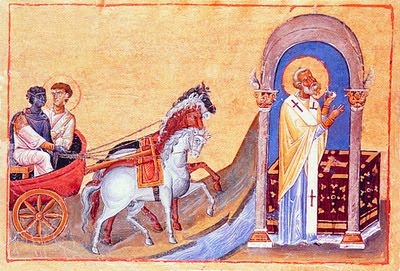 Image: Depiction of Philip and the Ethiopian Eunuch, from the Menologion of Basil II, an illuminated service-book (menologion) manuscript, c. AD 1000.

A new installment has been posted in the series on Eusebius of Caesarea’s The Ecclesiastical History: book 2, chapter 1 (listen here).

This chapter begins by describing events after the ascension. It largely follows the outline of Acts with additional material from Clement (of Alexandria) and possibly others.

He describes how Mattias was chosen to replace Judas and how Stephen, from among the seven, “was the first to carry off the crown” of martyrdom.

Next he describes how James “the brother of the Lord” or James the Just (in distinction from James of Zebedee) was the first bishop of Jerusalem.

He also recaps Thaddaeus’s mission to Edessa (from EH, 1.13).

Returning to Acts, he notes that after Stephen’s death there arose “the first and greatest persecution of the Church in Jerusalem by the Jews” which led to all but the twelve being scattered.

He describes the ministry of Philip, who, he says, had with Stephen “been already ordained to the diaconate [diakonia].”

When describing Simon Magus, Eusebius draws parallels to contemporary heretics: “It is worthy of wonder that this is still done by those who continue his most unclean heresy to the present day, for following the method of their progenitor they attach themselves to the Church like a pestilential and scurfy disease, and ravage to the utmost all whom they are able to inoculate with the deadly and terrible poison in them.”

The Ethiopian Eunuch he describes as “the first of the Gentiles” to receive the divine word and suggests that the returned “to his native land” to “preach the Gospel,” fulfilling Psalm 67:32 [LXX; cf. Psalm 68:31].

Lastly, he mentions the call of Paul as a “chosen vessel.”