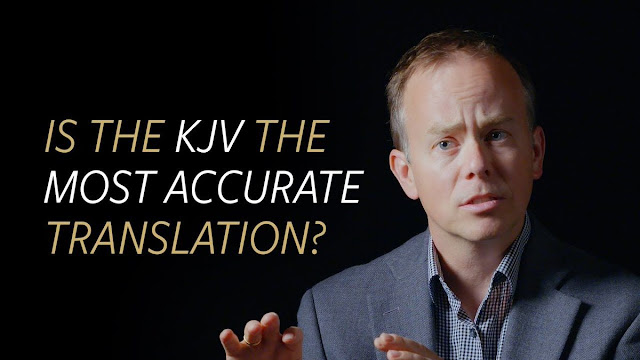 After a hiatus of several weeks, I have posted a new Word Magazine: WM 106: Plummer on the KJV (listen here).  A regular listener suggested a review of this youtube.com video in the "Honest Answers" series from the Southern Baptist Seminary, featuring NT Professor Dr. Robert Plummer, on the topic: "Is the King James Version of the Bible the most accurate translation?"

Unsurprisingly, Plummer not only rejects the KJV but also rejects the traditional text which under girds it. As happens too frequently among modern translation and text advocates, he lumps in defenders of the traditional text with the bogeyman of KJV-Onlyism. He suggests that the Greek text of the NT is based on the Byzantine text, rather than the Textus Receptus. Finally, he perpetuates the myth of Erasmus' "rash wager" leading to the insertion of the Comma Johanneum into the third edition of his Greek NT.

Some resources mentioned in this episode:

My blog post on WM 54: The Comma Johanneum and the Papyri, which points out that we actually have no papyri evidence pro or con on the originality of the CJ. This dulls the argument against the CJ based on the Greek manuscript evidence.

My article "Erasmus Anecdotes" from the Puritan Reformed Journal (January 2017), which demonstrates that the "rash wager" anecdote is a modern scholarly legend which began in the nineteenth century in order to undermine the Textus Receptus and which continues to be uncritically perpetuated by scholars today.

Grantley McDonald's Biblical Criticism in Early Modern Europe (Cambridge Press, 2016) , based on his 2011 dissertation at the University of Leiden, which explores the history of early modern controversy over the CJ. McDonald does not believe that the CJ is original, but his work (especially his dissertation) provides the most up to date analysis of the evidence relating to this disputed text.

In Bruce Metzger's Book titled: "The Text of The New Testament: Its Transmission, Corruption, and Restoration (4th edition)" Dr Metzger surprisingly stated the following on page 291 at the bottom, footnote #2. It says

"What is said on p. 101 above about Erasmus' promise to include the Comma Johanneum if one Greek manuscript were found that contained it, and his subsequent suspicion that MS. 61 was written expressly to force him to do so, needs to be corrected in light of the research of H. J. de Jonge, a specialist in Erasmian studies who finds no explicit evidence that supports this frequently made assertion; see his Erasmus and The Comma Johanneum', Epemerides Theologicae Lovanienses, lvi (1980), pp. 381-9."

The research that Dr Metzger was referring to can be found at the following link. https://core.ac.uk/download/pdf/15589157.pdf

Thanks for the input Phil!