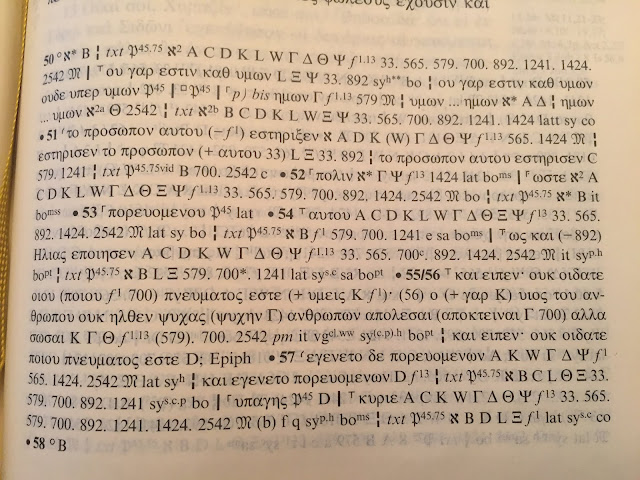 Translations based on the TR read as follows (disputed text underlined):

KJV Luke 9:55 But he turned, and rebuked them, and said, Ye know not what manner of spirit ye are of. 56 For the Son of man is not come to destroy men’s lives, but to save them. And they went to another village.

Compare translations based on the modern critical text:

ESV Luke 9:55 But he turned and rebuked them. 56 And they went on to another village.

The question: Is the passage found in the traditional text authentic, or is it spurious?

First: The following mss. and versions are listed in support of the traditional reading in the NA28:

Second: A shorter variant is also listed which reads: “and he said, you do not know what spirit you are [kai eipen ouk oidate poiou pneumatos este].” It is found only in codex D and in the Church Father Epiphanius of Constantia (d. 403). Note: NA26 also lists Marcion (c. II century) as a support for this reading but this mention is omitted in NA27 and NA28.

At the least, this shorter version of the variant provides evidence for at least part of the variant’s antiquity, with D dated to c. V century.

In his Textual Commentary (second edition, see pp. 124-125), Metzger connects the variant in Luke 9:55-56 with one that precedes in v. 54. In v. 54 the phrase “even as Elijah did” is omitted in the modern critical text but supported in the Majority text.

Metzger admits that the material omitted in the modern critical text in Luke 9:54, 55-56 “had fairly wide circulation in parts of the ancient church.” The absence of the disputed variant in v. 54 from “early witnesses’ like the heavyweight uncials Sinaiticus and Vaticanus (though it is present in Alexandrinus), according to Metzger, “suggests that they are glosses derived from some extraneous source, written or oral.” Metzger provides no further support or explanation for this conjecture.

KJV Luke 19:10 For the Son of man is come to seek and to save that which was lost.

KJV John 3:17 For God sent not his Son into the world to condemn the world; but that the world through him might be saved.

There were clearly some disputes that emerged over the proper text of Luke 9:54-56.

The case for the modern critical text reading:

On external evidence, it appeals to the omission of the variant in some early mss. which they favor, like Sinaiticus and Vaticanus.

On internal evidence, Metzger suggests that the addition to v. 56 is a harmonization with Luke 19:10 and John 3:17.

The case for the traditional text reading:

Must we necessarily assume that the shorter reading is authentic? Can we imagine any reasons why these variants might have been omitted for either unintentional (scribal errors) or intentional (theological) reasons?

Regarding the omission of “even as Elijah did” in v. 54, Godet notes: “Perhaps this addition was meant extenuate the fault of the disciples; but it may also have been left out to prevent the rebuke of Jesus from falling on the prophet, or because the Gnostics employed this passage against the authority of the OT (Tertullian, Adv. Marc. iv.23).”

Regarding the omission in vv. 55-56 Godet suggests “it is probable that the cause of the omission is nothing more else than the confounding of the words” in these verses. One possibility is that a scribe confused the “and he said [kai eipen]” of v. 55 with the “and they went [kai eporouthēsan].”

Godet is not a hard and fast TR advocate. He also entertains the possibility of “glosses” that might have been introduced that led later copyists to take “the liberty of making arbitrary corrections” in the passage, adding that “the suspicion of Gnostic interpolation may have equally contributed to the same result.”

Whereas modern scholars see the parallels with Luke 10:19 and John 3:17 as textual harmonization, the traditional might only see a consistent and accurate overlap of the teaching of Christ faithfully preserved among the various Gospels.

When it comes to external evidence, even Metzger must admit that the traditional reading “had fairly wide circulation in parts of the ancient church.” It was the dominant reading of the early versions (Old Latin, Syriac, Coptic).
In the end, this was the reading that prevailed in the Majority of Greek mss. and was incorporated into the printed TR text.

There are plausible explanations for the intentional or unintentional omission of the disputed passage in Luke 9:55-56.

What is at stake here? The Majority tradition holds that this is an authentic dominical saying of the Lord Jesus Christ. The modern critical text view holds that this passage is spurious and that it was wrongly preserved in those texts and translations which contain it. But what if the modern view is wrong? What if this is an authentic and original part of Luke’s Gospel? If this is true, we are rejecting the words of Christ.

I see no prevailing reason to abandon the traditional text here.

There appears to be a typo in “even ad Elijah did” just under the Internal Evidence: section.