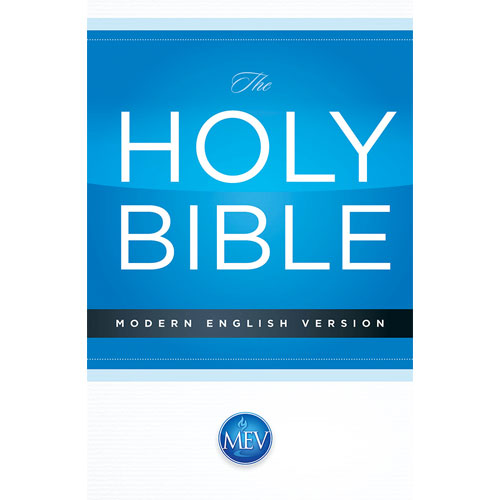 In this episode I share a draft of a written review of the Modern English Version (MEV):

Here is the opening to the review, the headings, and the concluding observations:

The Modern English Version (MEV) is yet another contemporary English translation of the Bible. This version is distinct, however, for several reasons. First, and most importantly, it is a translation based on the traditional original language texts of the Christian Scriptures (the Hebrew Masoretic text of the Old Testament and the Greek Textus Receptus of the New Testament), rather than the modern critical texts, which form the basis for most modern vernacular translations. Second, it also aims to be an “updating” of the King James Version (KJV) of the Bible, the venerable English translation that was based on these same traditional original language texts.

The history and perspective of the MEV

The MEV and the text of Scripture

The MEV and the translation of Scripture

Though the MEV is “yet another contemporary English translation of the Bible,” its differences from other modern translations are significant. This is the first widely available modern translation since the New King James Version (completed 1982) which aims to follow the traditional original language texts and emulate the translation style and wording of the KJV. It is, in fact, similar in many ways to the NKJV and thus shares in some of its strengths and weaknesses.

The MEV, no doubt, reflects the ongoing popularity of the KJV in the English-speaking world and the respect it continues to enjoy among evangelical Christians despite decades of the marketing of “new and improved” translations based on the modern critical text.   The MEV could easily be read and used in the pew in churches that ordinarily use the KJV or NKJV. It might even enhance and further the appreciation of the Tyndale/King James Version tradition. For these reasons it is a distinctive and even refreshing addition to a crowded Bible market.

I was waiting this review on MEV for a long time. I don't have a physical copy, but I have already got a look on the internet and really enjoy many parts of the translation, specially
1 John 5.7, which is one of the bests renderings of the Greek text, in my opinion. Even so, in terms of a modern TR-version, I still use the NKJV, and, of course, I use the KJV as the "Standard" version.


Thanks a lot for the review and God bless you!

P.S: Is there any chance to see a book about bible criticism having JTR as author?

VLB, thanks for your patience in waiting for the review. Hope you found it helpful. I've submitted a written version to a journal where I hope it will appear.

A book by me on text criticism? I'd love to write a popular level work defending the "Confessional Text" and feel like I have been accumulating research over the last few years toward this. Maybe I will have time to get started this winter if it snows enough. Smiles.