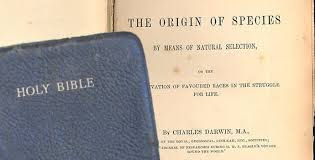 Charles Darwin's On the Origin of Species (1859) not only influenced re-calibration of the interpretation of the historicity of Genesis, but it had wider influence in other areas of Biblical interpretation as well, such as source criticism and the so-called Synoptic Problem.

In his “response” article in The Synoptic Gospel: Four Views (see this previous post), Two-Gospel Hypothesis advocate David Barrett Peabody addresses the “problem of omissions” objection against Markan Posteriority. This objection—lodged by those who hold to Markan Priority—suggests that Mark could not have been written after Matthew and Luke, because, if this were the case, it would not have omitted so much of their material. Mark, the shortest Gospel, must have been earliest and expanded upon by Matthew and Luke. So goes the theory of Markan Priority.

Among Peabody’s responses to this objection, he calls attention to the possible influence of Darwinian ideology on the assumption of Markan Priority:

The “problem of omissions” may have been raised by those who presuppose that the Gospel tradition always grew by incremental gain (perhaps under the influence of Darwin’s theory of evolution, once it appeared), and placing Mark’s Gospel third in the order of composition of the Synoptic Gospels clearly does not conform with Darwin’s theory, which never should have been applied in the field of literary criticism in any case (149).

He is correct. Actually, the entire Griesbach, Westcott and Hort textual-critical theory is a Darwinian theory of an earlier New Testament which was not as advanced theologically as is the Byzantine text.

Mark is shorter than Matthew overall. However, In particular pericopae Matthew is consistently shorter than Mark. Though D.A. Carson holds to Markan priority, here's what he says in his Matthew commentary: "when Matthew follows Mark, he condenses controversy stories by about 20%, stories that prove Jesus is the Christ by about 10%, actual sayings of JEsus scarcely at all, and miracles stories by about 50% (cf. Schweizer). Matthew, though allusive, is a highly disciplined writer, rigorously eliminating everything unrelated to his immediate concerns" (EBC 2nd ed., 235).

The order could just as easily be reversed, with Mark expanding certain episodes in more detail, and leaving off certain discourses altogether.

Pastor Riddle, do you hold Matthaean priority in the synoptics? I've been toying with the idea myself, lately.

No Expert, thanks for the comment. Though this post is about the Synoptic Problem I've previously made the point that this applies to text criticism also. Though Lachmann's challenge to the TR in his Greek NT of 1831 predates Darwin's work, I think Darwin's philosophy clearly had an influence on later nineteenth century outlooks on text criticism.

Daniel, Yes, you make some good points about the fact that overall Matthew with 28 chapters is longer than Mark with 16, it is actually shorter in individual passages shared with Mark.

As for my views on Matthew's Priority, I am, at the least, skeptical of Markan Priority and tend toward the independent development view. That said, I think a good case can be made for Matthew's priority based on the pride of place it has in the canonical order, external evidence from early Christian witnesses, etc.