Wilken on Baptism in the Early Church 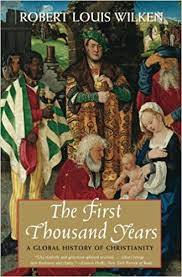 In Robert Louis Wilken’s The First Thousand Years: A Global History of Christianity (Yale, 2012), he offers an interesting description of the development of early Christian practices, like baptism. He draws upon the descriptions of baptism in the Apostolic Tradition, an early third century treatise. Wilkin notes:

After a long period of instruction and moral formation, those who had been accepted for baptism were to bathe, fast, and present themselves to the bishop…. Baptism took place at daybreak. A tank or pool would be filled with water, and the catechumens (those who had been instructed) would take off their clothes to prepare for immersion.

At this period of Christian history most people who were baptized were adults. But in the midst of the description of baptism the Apostolic Tradition inserts the surprising sentence: “You are to baptize the little ones first.” Apparently infant baptism was permissible—though not conventional—and parents or guardians would speak for the children. Then came the men, followed by the women, who were to let down their hair and take off any jewelry. Nothing could be taken down into the pool. First, the bishop would anoint each person with oil, “hand over” the trinitarian rule of faith, immerse the catechumen three times, and anoint him or her with oil a second time. Then the newly baptized were clothed, and the celebration of the Eucharist followed (176).

I was interested in the fact that Wilken affirms both that baptism was practiced by the mode of immersion and that the baptismal candidates were typically adults. We see the practice of infant baptism developing, but, according to Wilkin, it was not “conventional.” Paedobaptist Protestants not only have to explain the lack of warrant for infant baptism in the NT but also in the predominant practice of Christianity in the opening centuries of its existence.