Milosz on Free Speech and History 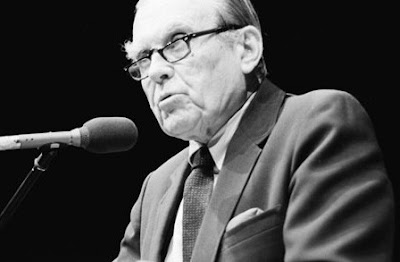 I recently read the 1980 Nobel Lecture (Farrar Straus Giroux, 1981) by Polish poet Czeslaw Milosz, given at the time he was a dissident exile from communist Poland. Much of the lecture’s critique of socialist efforts to silence free speech and to erase history sounds vaguely contemporary:

In a room where people unanimously maintain a conspiracy of silence, one word of truth sounds like a pistol shot (13).

Certainly, the illiterates of past centuries, then an enormous majority of mankind, knew little of the history of their respective countries and of their civilizations. In the minds of modern illiterates, however, who know how to read and write and even teach in schools and universities, history is present but blurred, in a state of strange confusion (14).

Moreover, events of the last decades, of such primary importance that knowledge or ignorance of them will be decisive for the future of mankind, move away, grow pale, lose all consistency, as if Friedrich Nietzsche’s prediction of European nihilism found a literal fulfillment. “The eye of a nihilist,” he wrote in 1887, “is unfaithful to his memories: it allows them to drop, to lose their leaves…. And what he does not do for himself, he also does not do for the whole past of mankind: he lets it drop” (15).