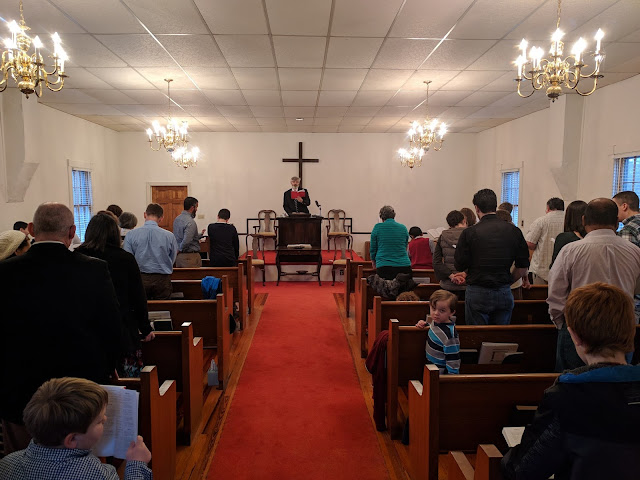 Paul and Timotheus, the servants of Jesus Christ, to all the saints in Christ Jesus which are at Philippi, with the bishops and deacons (Philippians 1:1).

When is a church a church? What make a church different from a fellowship, a Bible study group, or a para-church ministry?

Our Particular Baptist forebears addressed these questions in chapter 26 of the Second London Baptist Confession (2LBCF). They concluded: “A particular church, gathered and completely organized according to the mind of Christ, consists of officers and members….” (26:8).

One of the proof texts they offered was Philippians 1:1. We have a narrative in Acts 16 of the founding of the church at Philippi under the ministry of Paul and Silas. Lydia, the seller of purple, and the Philippian jailer, as well as members of their respective households, were among the first converts who were baptized and apparently formed the nucleus of a developing church. No mention is made in Acts 16 of officers being appointed. But when Paul writes his later epistle to the church (Philippians), it is clear that officers have been named. Paul writes to the saints (the hagioi, or “holy ones,” not super-Christians but the whole people of God made set apart by Christ), along with their bishops (episkopoi, or “overseers,” a term used interchangeably with presbyteroi or “elders”—see Titus 1:5-7) and deacons (diakonoi).

A church, it seems, can come into existence when God’s people are gathered and are “giving themselves up to the Lord and to one another” (2LBCF 26:6), but it is only “completely organized” when it has Scriptural officers “for the peculiar administration of ordinances, and execution of power and duty, which he instruct them with, or calls them to” (26:8).

I preached and taught on this topic last Sunday at the meeting of the Lynchburg RB Mission. Continue to keep this ministry in prayer as it develops and we move forward.

I'm having trouble finding a suitable Church. I'm looking for a pastor that will deliver teaching sermons for the adult believer. I'd also like a choir.

MJ, sorry you have not been able to find a church.

If you have not done so already, you might try going to sermonaudio.com and typing in your zip code to their churchfinder.

For a state by state list of "Calvinistic" (though not necessarily fully Reformed Baptist churches), check out the "Founders" list:

For a state by state list of RB churches look here:

I'd say find a faithful church with good teaching, no matter its size. I'd also say find a church that follows the "regulative principle" which would include congregational singing of praise and not a choir. Smiles.

One more point: Last week I got behind a car with a good bumper sticker: "The church that is alive is worth the drive"--that's right!!! You may have to drive an hour or more.

Praying you will find a body soon for worship and fellowship.