The Synoptic Problem, Markan Priority, and the Ending of Mark 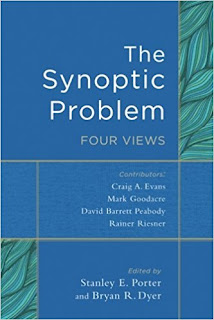 I just finished this am Mark Goodacre’s chapter on the “Farrer Hypothesis” (aka “The Farrer-Goulder-Goodacre hypothesis”). This view makes its effort to solve the so-called Synoptic Problem by arguing Mark was written first, then Matthew drew on Mark, and Luke drew on both Mark and Matthew. The “triple tradition” is due to Matthew and Luke’s dependence on Mark, and the “double tradition” is due to Luke’s dependence on Matthew. Thus, it dispenses with any necessity for Q.

I do like Goodacre’s challenging the modern consensus on Q, particularly this statement: "In the face of this kind of confidence, it is always useful to remind ourselves that there is no ancient, external evidence of any kind for Q’s existence. There are no textual witnesses, no fragments, no patristic citations—nothing. It is purely a scholarly construct, a hypothetical text"(59).

I am less enamored with his insistence on Markan priority.

It is interesting also to note how Goodacre assumes that Mark originally ended at 16:8 and thus did not have any resurrection appearance narratives. He assumes this without argumentation to this end or supporting footnotes. Thus, he can speculate that Matthew and Luke added their resurrection appearance narratives to the ending of Mark (as well as their birth narratives to the beginning) to expand Mark.

So, Goodacre writes: "Similarly, neither Matthew nor Luke stops where Mark stops, instead going on with resurrection appearance and Jesus’s commissioning of the disciples (Matt. 28:9-20; Luke 24:9-53)" (53).

Later he can mention the possibility that Matthew and Luke independently structured their Gospels “by adding a prologue dealing with Jesus’ birth and an epilogue dealing with his resurrection” (54), though he concludes that the evidence for Luke’s “familiarity” with Matthew is strong, concluding that “the evangelists share the same basic approach to Mark’s Gospel, adding a prologue about Jesus’s birth” and “an epilogue about his resurrection” (58).

His comments got me thinking again about how the rise of source criticism and Markan priority in the nineteenth century undoubtedly contributed to the devaluation and rejection of the traditional ending of Mark. The reigning theory held that Mark was the earliest Gospel and that it was used as a source for Matthew and Luke, which expanded and added to it. The hypothetical Q document suggested the possibility of a “sayings source” that focused on the teaching of the Jesus rather than his death, burial, and resurrection. Goodacre’s suggestion that Matthew and Luke used Mark and added a prologue (the birth narrative) and an epilogue (resurrection appearances) to it follows this line of thinking.

The problem, however, is that this view suggests early Christians would have thought it fitting to have a Gospel that did not included resurrection appearances. Matthew, Luke, John, and Paul’s rehearsal of the gospel in 1 Corinthians 15:3-8 all contradict this notion. The reasoning is circular. First, assume Mark was written first. Second, assume Mark originally ended at 16:8. Third, assume Matthew and Luke augmented Mark by adding their resurrection appearance narratives. But what if Mark 16:9-20 is original?