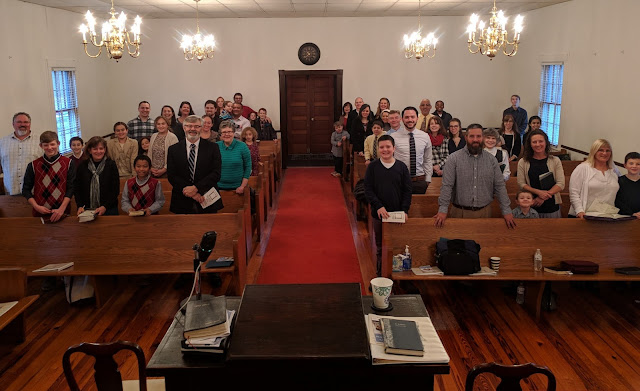 Image: Lord's Day assembly at CRBC (2.11.18)
Note: Devotion taken from last Sunday's sermon on John 7:25-36.
John 7:34 Ye shall seek me, and shall not find me: and where I am, thither ye cannot come. 35 Then said the Jews among themselves, Whither will he go, that we shall not find him? will he go unto the dispersed among the Gentiles, and teach the Gentiles?
Christ here prophesies his ascension and exaltation after his crucifixion, burial, and resurrection (v. 34).
His words seem mainly aimed at the unbelievers, the skeptics, the persecutors, and the murmurers. Not only is he saying here that they will not be able to find him on earth, because he will be ascended, but also that they will not be able to find him in glory, because their unbelief and hostility toward him will bar them from ever entering into that great presence.

We hear a comedy of ironic misunderstanding, ignorance, and spiritual blindness in the response to Christ’s words in v. 35a: “Whither will he go, that we shall not find him?” They then suppose in v. 35b that Christ means he will flee Palestine and go out among the Jews who are “dispersed among the Gentiles [literally: eis ten diasporan ton hellenon: into the diaspora of the Greeks]” and “teach the Gentiles [literally: the Greeks].” Will he go to Greek-speaking Jews, to the God-fearers [Gentiles drawn to the synagogues], and even to the completely pagan Gentiles?

And what is the greatest irony here? Indeed, after Christ’s death, and his resurrection, and his glorious ascension, he will go to the world. He will go to the ends of the earth through the preaching of the gospel to all nations, which he will commission his apostles to fulfill (cf. Matt 28:19-20; Mark 16:15).

What they see as ludicrous will be a tremendous and breathtaking reality. Though these men will seek him to persecute him and not find him, there will be those who seek him and find him, by grace, in the preaching of the gospel.

There remain two groups of seekers. Will you be among those who seek Christ to reject him, or will you seek him to know and serve him?