WM 92: Rejoinder to a Lutheran's Objections to Limited Atonement 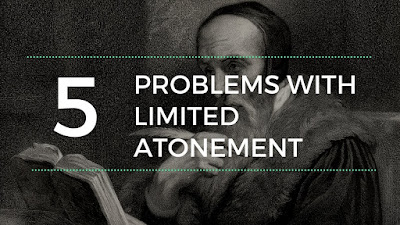 I have posted Word Magazine 92: Rejoinder to a Lutheran's Objections to Limited Atonement (listen here).

Jordan Cooper is a young Lutheran minister serving a congregation in Illinois (Faith Lutheran Church in Watseka). He also directs Just and Sinner Publications, hosts the Just and Sinner Podcast, and has an active youtube channel.

I got an email back in November from someone who called my attention to an 18 minutes video posted by Jordan Cooper in April 2017. The video is titled, “Five Problem with Limited Atonement” (see it here).

Here is part of the email:

The main reason I’m contacting you is to request a topic for one of your podcasts. I would love to hear your response to a Lutheran pastor by the name of Jordan Cooper. He has an 18 minute YouTube video on the “5 Problems with Limited Atonement”….

I have an older brother, who introduced me to Calvinism many years ago who is now considering Lutheranism. He’s the one who sent me the video claiming that it contains a “powerful argument” against particular redemption right from the book of Hebrews.

In this episode I want to review and respond to Cooper’s critique of limited atonement. Here are some notes from my review:

First: The Bible speaks of many who fell away but (who) were also bought by the blood of Christ.

Response: Is this a description of an apostate or a warning against becoming a backslidden believer who brings shame to the name of Jesus? I think it is the latter.

Response: See John Owen’s assessment that these were “saints in show” and not genuine believers.

Second: Many texts speak about the universal nature of Christ’s saving work.

He mentions the following texts:

Response: This verse does not refer to universal atonement but to the universal scope of the gospel: that all kinds of men (Jews and Gentiles) will be saved.

Response: 1 Timothy 2:4 is also a passage related to the universal scope of the gospel: that all kinds of men (Jews and Gentiles) will be saved. To measure the importance of that theme for Paul see Ephesians 3:1-6.

Response: See a blog post I recently wrote on this verse, as one of the prooftexts in the 2LBCF (1689) in the chapter on Providence (5:7). There I point out that this verse is not addressing salvation of all men but God’s providential care for all men, and especially for his saints.

Third: Limited Atonement is incompatible with the free offer of the gospel.

Fourth: The book of Hebrews

Response: The book of Hebrews is in no way incompatible with the Reformed view of salvation. It exalts Christ as the once for all sacrifice. It is written to Jewish believers in order to exhort them to persevere in the faith. Aside from its pastoral purpose, it also has an evangelistic purpose, as it undoubtedly would have been read in congregations that would have included both believers and unbelievers.

John Owen completed seven volumes of commentaries on Hebrews and retained a consistent view of Reformed soteriology throughout (see here). Any so-called objections passages in Hebrews will find a satisfying interpretation in Owen.

I have preached a 46-part sermon series through the book (see here). I did not find anything within Hebrews to contradict Reformed soteriology.

Fifth: The words of Jesus

Cooper mentions Christ’s prayer from the cross in Luke 23:34 (BTW, We can confidently uphold the text of this prayer as genuine! See this post). Yes, we can say that his prayer was answered, not that in all who rejected Jesus were saved or given the hypothetical possibility of salvation, but that some were actually saved and had their sins forgiven under the preaching of the Gospel (see Acts 2:22-24, 37-38).

He mentions Judas and Christ’s words in the upper room to the disciples in Luke 22:19: “This is my body which is given for you.” Whether Judas was present or not is irrelevant. Jesus was not saying that he would die for Judas. His death would be for the elect. Even today, false professors take of the Supper unworthily.

Finally, he notes Christ’s prayer for the disciples in John 17:12. How could this apply to Judas?

He fails to pick up on the fact that in John there is peculiar language that is used for the choosing (election) of the disciples for service as disciples that does not have to do, necessarily, with Christ’s choosing (election) of the disciples for salvation (see John 6:70-71; 15:16). So, there is nothing inconsistent with saying, Jesus chose the Judas to be among the twelve, but he did not choose him for salvation.

It is typical of those who reject limited atonement (the Biblical doctrine of redemption) to raise objection passages like these.

As we have demonstrated, when rightly divided these passages do not contradict limited atonement.

If they did, Scripture would be incoherent. It is those who hold to general or universal redemption who must explain how they make sense of the passages that, we believe, so clearly teach limited atonement, or particular redemption, including:

Isaiah 53:11 He shall see of the travail of his soul, and shall be satisfied: by his knowledge shall my righteous servant justify many; for he shall bear their iniquities.

Matthew 1:21 And she shall bring forth a son, and thou shalt call his name JESUS: for he shall save his people from their sins.

Mark 10:45 For even the Son of man came not to be ministered unto, but to minister, and to give his life a ransom for many.

John 10:15 As the Father knoweth me, even so know I the Father: and I lay down my life for the sheep.

Acts 20:28 Take heed therefore unto yourselves, and to all the flock, over the which the Holy Ghost hath made you overseers, to feed the church of God, which he hath purchased with his own blood.

1 Corinthians 15:3 For I delivered unto you first of all that which I also received, how that Christ died for our sins according to the scriptures;

Ephesians 5:25 Husbands, love your wives, even as Christ also loved the church, and gave himself for it;

Hebrews 1:3 Who being the brightness of his glory, and the express image of his person, and upholding all things by the word of his power, when he had by himself purged our sins, sat down on the right hand of the Majesty on high;

The onus is on the defenders of universal atonement to exegete and interpret how these passages support their position.

My sermon series on the doctrines of grace

Alpheus Atkins’ 2017 Youth Conference series on the doctrines of grace

More blog articles on this topic:

He tasted death for every man (Hebrews 2:9)