Introduction:  I recorded and posted today WM # 55: Review: The Gideons' Modified ESV Edition (2013). I want to give a shout out to Ethan McG. who gave me a new mic a few months back and who's been prodding me to use it to improve the sound quality. I finally used it for this episode. Hopefully, it is easier to hear!

Our church did an outreach last Saturday at the Louisa Agricultural Fair.  While there I struck up a conversation with a man at a table set up by the Gideons distributing orange covered KJV New Testaments.  I’d had several folk tell me that the Gideons had begun distributing Bibles in the ESV translation.  I asked him about this and he gave me a brown covered copy.  I looked over the text and thought I’d do a WM reviewing the Gideon Modifed ESV translation.

First:  Who are the Gideons?  The Gideon website (gideons.org) describes the organization as “an Association of Christian business and professional men and their wives dedicated to telling people about Jesus through associating together for service, sharing personal testimony, and providing Bibles and New Testaments.”  It also notes they are best known for placing Bibles in hotels but adds, “we also place and distribute Scriptures in strategic locations so they are available to those who want them, as well as to those who may not know they need them.”

The Gideons, a parachurch Bible distribution ministry, was founded on July 1, 1899 in a meeting at the YMCA in Janesville, Wisconsin.  Three men were present:  John H. Nicholson (President), Will J. Knights (Vice-President), and Samuel E. Hill (Secretary-Treasurer).  These three were Christian businessmen who wanted to place Bibles in hotel rooms for travelers.  The idea had come to Nicholson and Hill when they had providentially shared a hotel room Beloit, Wisconsin in 1898 and joined in fellowship. They chose the name “Gideons” after the Judge Gideon in Judges 6-7.  By 1908 they were seeking the support of local churches.  Between 1908 and 2001 they distributed a billion copies or portions of the Bible.  Between 2002-2015 they distributed their second billion.  Though supported by individual churches the organization remains a parachurch ministry operated by Christian laymen over age 21.  It is now based in Nashville, TN.

It is a generally conservative organization.  From the website:

What do Gideons believe?

The Gideons International is a diverse association representing many Protestant denominations - all with a common interest in spreading the Gospel of Jesus Christ.

All Gideons uphold these core beliefs:

All Gideons must also:

One mark of the ministry’s general conservatism is the fact that till recent year it exclusively distributed the King James Version of the Bible in English.

With the rise of modern translations, the Gideons apparently began to also distribute modern versions.  They first used the NIV, then the NKJV.  In 2013, however, they apparently adopted a modified version of the ESV.  See Josh Dermer’s post on this shift. 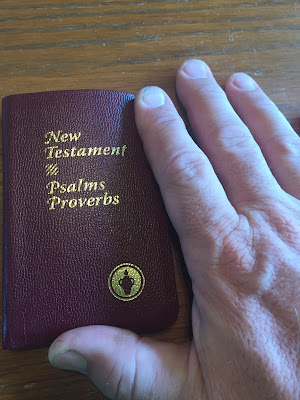 The copy has a preface with “copyright information.”  It claims that the ESV “carries forward the historic stream of Bible translation in English exemplified by the King James Version (KJV) Bible of 1611 and subsequent essentially literal Bible translations.”  This claim can be challenged since the ESV does not follow the Tyndale/KJV tradition of 1525/1611 but the English Revised Version tradition of 1881.
The preface adds that Crossway licensed the ESV to the Gideons for use and distribution and granted permission “”to include certain alternative readings based on the TR.”  It later adds that this Gideon edition “follows the TR manuscript tradition, which corresponds in the vast majority of instances to the corpus of Greek NT manuscripts known among scholars today as the Majority Text.” 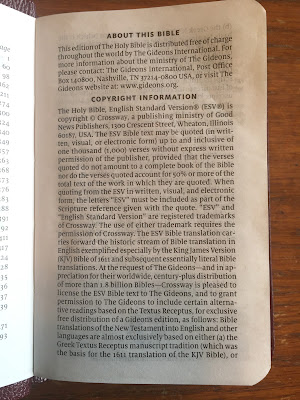 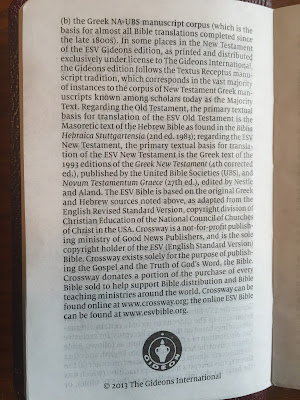 I was curious to see how the Gideon Modified ESV treated various controversial texts.  Here is a selective (non-exhaustive) survey: 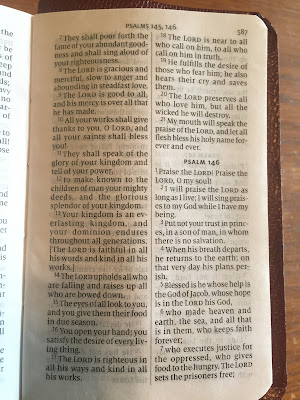 The Gideons’ Modified ESV (2013) is a unique creation.

It does not follow the modern critical text (e.g., there are no brackets around the ending of Mark or the PA).

It does not follow the TR (e.g., excludes the CJ).

One might, I suppose, positively call it an interesting hybrid.  On the other hand, one might see it as a monstrous Frankenstein.

I see two major problems with The Gideons’ Modified ESV (2013):

1.  It represents inconsistency in conviction and principle.

For the Gideons it seems an inconsistency in that they have historically distributed the traditional text.  Now they are adopting a modern critical text.

For the ESV it seems an inconsistency in that they have adopted the modern critical text but now have allowed The Gideons to publish a version which includes TR and Majority text readings.

2.  It undermines the stability and reliability of the Bible by rejecting a consistent philosophy of Bible text and translation and a standard Biblical text.

We can contrast The Gideons with the Trinitarian Bible Society which exclusively promotes Bible translations based on the traditional (confessional) text.  In English, they exclusively distribute the KJV.

I wonder just how harmful this eclectic modern critical text onlyism is to the people of God? Jesus said it would be better for someone to have a millstone hung around his neck and be drown in the depths of the sea than to cause one of his little ones to stumble. I'm afraid the modern critical text must be a stumbling block to many people. I wish the Gideons would stick to the KJV.

Thank you, this was very interesting! A friend showed me this more exhaustive list of the differences: https://www.scribd.com/doc/184268806/Gideon-changes-to-the-English-Standard-Version-New-Testament?keyword=4417&content=10079&ad_group=Online%20Tracking%20Link&campaign=Skimbit%2C%20Ltd.&source=impactradius&medium=affiliate&irgwc=1