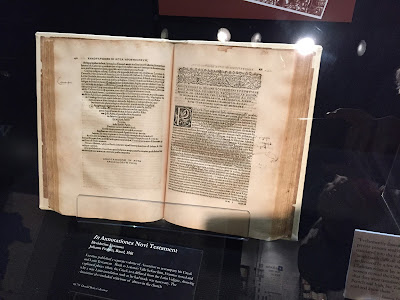 Image:  A closeup from part of Erasmus' Annotations on the book of Acts, at the Dunham Bible Museum at Houston Baptist University.

Note:  I presented a short paper in the afternoon beak-out session last Friday (2.26.16) at the HBU Erasmus Conference on "John Calvin and Text Criticism." It was a challenge to compress a 6,000 word essay into a 30 minute presentation. I have posted an audio recording of the paper to sermonaudio.com (listen here).  Below is an abstract of the paper:

It is sometimes suggested that the foundational theologians and preachers of the Protestant Reformation era, including John Calvin, were largely unaware of many of the disputed textual passages in the Greek New Testament.  They used the printed editions of the Textus Receptus Greek New Testament out of necessity, convenience or ignorance rather than conviction.  It is further suggested that many of the most significant textual disputes regarding the New Testament came to light only in the modern era, after the discovery and printing of uncial manuscripts (like Codex Sinaiticus) and papyri.  Thus, it is assumed that if the Protestant Reformers had the information which we now have today they would eagerly embrace the modern critical text of the Greek New Testament.   This paper will explore and challenge these assumptions by offering a survey and examination of John Calvin’s exegetical treatment of various disputed New Testament passages in his writings, especially in his commentaries and in his Institutes of the Christian Religion.   Passages surveyed include:  the doxology of the Lord’s Prayer (Matthew 6:13b); the Pericope Adulterae (John 7:53—8:11); the Mystery of Godliness passage (1 Timothy 3:16); and the Comma Johanneum (1 John 5:7b-8a).  It argues that Calvin, in particular, was well aware of many of the textual challenges in the Greek New Testament, but he nevertheless affirmed the Textus Receptus, for theological and convictional reasons.  This, in turn, shaped a doctrinal trajectory on the theology of Scripture reflected in the classic Reformed confessions and in the Bibliology of later orthodox Protestant theologians.

Can I get the full paper? I am interested.

Hi Yoshle, I later published the paper as an article in the Puritan Reformed Journal. You can find it here: