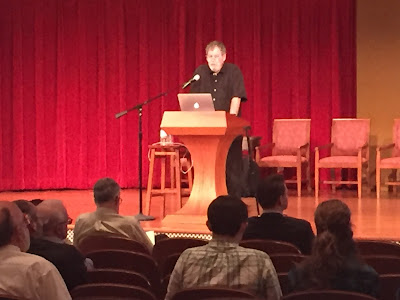 Jeff Cade, Martin Luther and the Reliability of the NT Manuscript tradition.

Session III:  Dan Wallace:  Erasmus and the Publication of the First Greek NT

DW says Erasmus used only seven manuscripts, and he thinks he might only have used three.

Erasmus’ Novum Testamentum was rejected by Catholics and embraced by Protestants.
DW says there were imperfections in Eramus.  There was a rush job in printing, that resulted in “hundreds and hundreds of errors.”  There were Latin interpolations, as at Acts 9:4-6 and Revelation 22:17-22.  See especially “book of life” versus “tree of life” at Rev 22:19.

There was also the notorious inclusion of the Comma Johanneum in the third edition. Erasmus asked a friend to check Codex B.  DW says a scribe working at Oxford seems to have “made to order” a complete Greek NT ms (Codex 61) that had the CJ.

DW reported that the CJ now found in 9 mss (4 in text and 5 in margin).  The earliest is from the 10th century.  DW wonders if more will be found.

Wallace offered few surprises in his presentation on Erasmus. He was appreciative of Eramus' work but sees the modern critical text as superior. He perpetuated the “rush to print” storyline. To his credit, he noted that the “rash vow" story on the CJ is not historically reliable but then proceeded to covey the related account of Codex 61 as created by Froy/Roy.

In the Q and A I asked about the number of papyri and later Greek mss. we have of 1 John. To say we only have 9 mss. with the CJ sounds devastating but there may not be that many extant mss. or early fragments of 1 John, so that the number that have the CJ might, in fact, be fairly respectable. DW did not know the details on the number of 1 John mss. off-hand.
Posted by Jeffrey T. Riddle at 6:47 AM