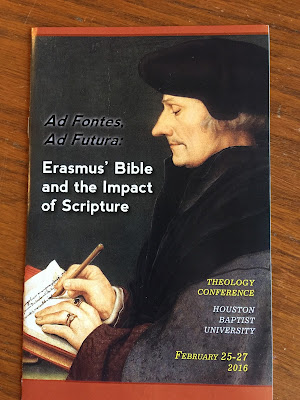 The 2016 Theology Conference at Houston Baptist University was titled “Ad Fontes, Ad Futura:  Erasmus’ Bible and the Impact of Scripture.”  The conference theme was in honor of the 500 year anniversary of Erasmus’ Novum Instrumentum omne (1516) which provided the first printed Greek NT and became the basis for the so-called Textus Receptus.  The conference was held February 25-27, 2016 Thursday evening to Saturday morning.  There were four plenary lectures and four break sessions.  Here are my notes from session one (2.25.16):

Session 1:  Timothy George, “Erasmus and the Search for the Christian Life”

TG is dean of the Beeson Divinity School at Samford University in Birmingham, AL. TG noted that it is good to smell the printer’s ink in Basel before moving to the anniversary of Luther in 2017.

Who was Erasmus?  What made him tick?  How did the Greek NT fit into his thought?
TG says he is the most tragic of the Reformers (?), living at the confluence of Renaissance and Reformation.  Though he remained RC, by 1559 all of Erasmus’ works were put on the banned index.

What did he look like?  According to an early biographer who was his friend he had a fair complexion and blue-ish gray eyes.  He was winsome, reticent, a brilliant conversationalist.  He had arched eyebrows, wry smile.  He had a delicate constitution.
He was one of the world’s first best-selling authors.  He was always on the move, always traveling.  There were FOEs (Friends of Erasmus) all over the world.

He was the first well-known public intellectual.  He knew he played a unique role in introducing the world to new learning.  He believed he had awakened the world from its “pharisaical slumber.”

He brought together the classical and Christian traditions, the good and the sacred.

In April 1517 Erasmus wrote to Pope Leo X:  “If ever there was a golden age there is good hope there will be on in our time.”  He was filled with optimism and hope.  He had ties with the Pope and with the kings of Europe.  Soon, however, the earthquake of Luther’s Reformation would come.  Erasmus would eventually flee Basel due to uproar over the Reformation.  He later called it the worst century since Jesus Christ.

The formation of Erasmus:  He was born the illegitimate son of a Dutch priest.  We must be careful of psychoanalyzing, but this was certainly a cloud over his life.  His enemies often threw this in his face.  Is this why he moved so much?  He even backdated his birth.  He lost his parents in the Plague.  He was 13 when his mother died.  Many of his fellow students also died.  Luther also had a brush with death in the thunderstorm.  Whereas his experience gave Luther a combative nature, Erasmus would speak of his experience giving him a “weakness of spirit,” pusillanimity.

Erasmus entered the monastery and became a monk but his heart was not in it.  He snuck away to the library.  R. Bainton:  Luther went to the monastery to save his soul; Erasmus to enlighten his mind.

He became a secretary to a bishop and found a place to teach in Paris at the College de Montague (the same school where Calvin and Ignatius Loyola studied).

Erasmus was not pleased with the scholastic education system of his day.  He wanted to pursue “the philosophy of Christ.”  He first used the term in 1503 in the Enchiridion.  It was a program of moral reform for the individual and society and centered on personal devotion to Jesus.  His views were shaped by three persons:

1.  John Colet:  Erasmus heard his lectures on Paul.  Colet set his piety ablaze by pointing him to Paul and Plato.   From Paul he learned about grace:  the letter kills, but the Spirit gives life.  Erasmus wrote four commentaries on Paul, now lost.   From Plato he learned idealism.  His spirituality was focused on stillness.

2.  Petrarch:  He was interested in history as more than merely a series of events/facts and in rhetoric.  He thought of history as a golden age, a fall, and a renewal.  Erasmus also thought in this way.

3.  Lorenzo Vallla.  He had a critical role in philology.  He examined the “donation of Constantine” and found it a forgery.  This gave focus to the importance of text criticism.  Erasmus discovered Vallas’s “Annotations” on the NT in a monastic library and published it.  This fueled interest in text criticism.

Erasmus’ “evangelical” heart is what makes him so important for the whole church:  Catholic, Protestant, Quaker, etc.  He wanted the Bible in the language of the people.

Erasmus died in Basel, then a Protestant city, in 1536.  This was the same year of Calvin’s first edition of the Institutes.  Erasmus’ last words in Dutch:  Liebe Gott, Dear God….

TG sees these last words as significant.  He says we can commend this type of piety in Erasmus.

In discussion George notes that he has grown more sympathetic to Erasmus over the years.

When asked about Erasmus and Luther TG cites a work by a Jesuit author, H. J. McSorely, titled, Luther Right or Wrong?  (1969).  TG says Luther was right, but he does not see this as the final word on the debate.

This was a thoughtful and informative lecture from George. TG has long expressed sympathies with RC positions and on supposedly bridging the divide between Protestants and the RCC (cf. his input on the “Manhattan Declaration”). My friend Rob Stovall and I heard TG speak at an ETS event a few years ago and were struck by his references to the Pope as “the holy Father.” He did so at least once in this lecture also. Thus, it was not surprising that he presented a favorable view of Erasmus’ spirituality and counts him as a 'reformer' (though there was little reference to Erasmus' understanding or articulation of the Biblical gospel in it).
Posted by Jeffrey T. Riddle at 3:16 PM