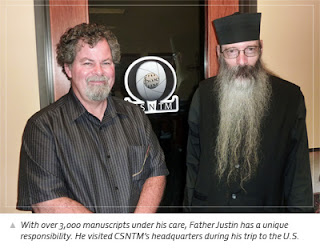 Image:  A photo from the CSNTM website of Dan Wallace with "Father" Justin, Librarian of St. Catherine's Monastary, Mt. Sinai
Back on February 1, 2012 evangelical NT scholar Dan Wallace perked up ears when in his third “debate” (dialogue) with Bart Ehrman he made mention of having recently discovered a fragment from Mark’s Gospel that may date to the first century, which, if true, would make it the earliest record of Mark in existence.
On February 10, 2012 Wallace made a post to his The Center for the Study of New Testament Manuscript Studies website titled, “Earliest Manuscript of the New Testament Discovered?”  In that post he explained that “seven New Testament papyri have been discovered—six of them probably from the second century and one of them probably from the first.”  Wallace adds that “the first century fragment” has been dated “by one of the world’s leading paleographers,” who “said he was ‘certain’ that it was from the first century.”  He then states that this fragment is from the Gospel of Mark, and, if the dating is accurate, it would make this the earliest manuscript of Mark, predating p45 “by 100 to 150 years.”  Wallace also states that these manuscripts will be published in about a year.
There are a few things curious about the announcement.  Most notably, why the mystery?  Where were the manuscripts discovered?  Who discovered them?  Did Wallace’s CNTMS have a hand in their discovery?  How extensive is the Mark fragment and what verses does it include? What six books are the other manuscripts from and how extensive are they?  How have they been tentatively dated to the second century?  Who is the paleographer who has dated the Mark fragment to the first century?  How can he be “certain” of his dating?  What would be the purpose of keeping his identity secret?
Adding to the intrigue, Baptist Press did an article on Wallace’s manuscript find on February 16th titled “Q & A:  A First Century Manuscript of Mark Found?” which includes an interview with Southeastern Seminary NT scholar Andreas Kostenberger.  Kostenberger states that “scholarly caution” should be maintained, noting that there have been other claims to the discovery of early manuscripts that have later fizzled (e.g., the notorious “Secret Gospel of Mark” that ended up being a hoax).   He also suggests that the reasons for discretion might be connected to a publishing agreement with Brill.  Baptist Press did a follow up article on February 28th titled “1st Century N. T. fragment:  more details emerge.”  This article cites further information shared by Wallace in a February 23rd radio interview with Hugh Hewitt.  Among the new details:  The manuscripts were discovered in Egypt.  In addition to the Mark fragment, there is a sermon from Hebrews and “second century fragments from Luke and from Paul’s letters.”  Wallace is cited as saying that four of these Pauline manuscripts would predate p46 (c. 200 AD),  the earliest known papyri from Paul.  He is also cited as saying that the significance of this find “would be on par with the significance of the Dead Sea Scrolls.”  That is quite a claim given that the Dead Sea Scrolls, discovered in 1948, contained a library of over 800 volumes (mostly in fragments) and provided manuscripts of the Old Testament that were in some cases more than a thousand years older than previously known documents!
Over on the Evangelical Textual Criticism blog, there seems to be more than a little skepticism over Wallace’s find (and some initial misunderstanding about Wallace’s report) in a February 10th post.  In the comments, for example, Peter Head makes the following observation:
It doesn't make sense to me that a leading palaeographer would express themselves as "certain" on such a matter. Dating scribal hands on the basis of palaeography does not generally lead to certainty but to probabilities and to date ranges and one would expect a leading palaeographer to know that.  Now if the fragments have been found bundled together with a bunch of dated documents all from the first century, that would be interesting. But it doesn't sound like anyone has done this work yet.

So we are left with a couple of options: a) this is not a leading palaeographer; b) he has been misquoted/misunderstood; c) he is wrong; or d) (less likely) he is right and there is some peculiar feature of this manuscript that leads to the peculiar confidence expressed.

There is also a post on that blog from February 6th on Walllace’s “debate”with Ehrman, which includes a link to Andreas Kostenberger’s analysis in which he critiques Wallace’s approach.
So, what’s the big deal about Wallace’s claim about finding the earliest fragment of Mark?  There is obviously a place for the collection and historical study of Biblical manuscripts, including fragmentary texts.  These documents, if authentic, might indeed give further historical proof for the first century origins of the New Testament writings (and, yes, there are radical scholars who want to late date much of the NT).  The problem comes with the attempt to sensationalize such discoveries by perhaps claiming greater significance for them than is warranted, or making such claims prematurely.  There is also the scent of academic elbowing and self-promotion of the next book.  You sometimes get the sense that Wallace is a big fan of the “Indiana Jones” films and that there just might be a rumpled fedora and a bull whip in his closet.  Of course, for Wallace and others who adopt the modern eclectic approach, such finds could potentially alter their construal of the “original” text of Scripture, depending on the find.  The modern critical text is necessarily and inherently unstable and might be radically altered by the newest “discovery.”  This is why I prefer the stability of adopting the traditional text.
Posted by Jeffrey T. Riddle at 1:07 PM

You sometimes get the sense that Wallace is a big fan of the “Indiana Jones” films and that there just might be a rumpled fedora and a bull whip in his closet.

If he's in Egypt, the hat and whip are with him; otherwise, the hat is in the closet and the whip is in his sock drawer.

This is pretty interesting stuff. Your points are well taken, but I note that you complain about secrecy and follow it with comments about premature announcement.

The Indiana Jones reference is about as far as you can get from representing him. It may be a clever movie tie-in, but as a journalist who has interviewed him, I have to say it misses the mark. I suggest you do some research on how reserved he is about announcing such discoveries to give you a context to appreciate the credibility of his remarks.

Can you recommend some internet materials focusing on how the New Testament manuscript evidence compares with other writings from the ancient world, along the lines discussed by J McDowell's Evidence That Demands a Verdict? Any 'Apologetics' suggestions on this topic will be gratefully received. Thanks.

Though he defends the modern critical text, James White might have some info like this at his ministry site (aomin.org).