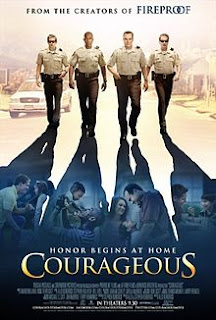 My family (well, those of us over age 13) watched “Courageous,” the latest film from the Kendrick brothers and Sherwood Baptist Church, on video the other night.  Just as “Facing the Giants” had a high school football theme, and “Fireproof” had a firefighter theme, “Courageous” has a policeman theme.  Most importantly, it focuses on the topic of fatherhood.  The Kendrick brothers have proven that Christians can make commercially appealing films with fairly high production values on a shoe string budget with mainly amateur actors that put Hollywood to shame.
Though there were plenty of things in the film to applaud, it seemed to me to be the weakest of the Kendrick brothers’ films thus far (I have not yet seen their first film “Flywheel”).  Maybe that’s what happens when you make a number of these types of productions—it gets formulaic.  “Facing the Giants” has the coach writing down his life principles and sharing them with the team; “Fireproof” has the fireman following a written guideline on how to love his wife; and “Courageous” has the policeman writing down his resolutions on fatherhood and sharing them with his police buddies.  There were some emotionally powerful moments.  If you’ve seen it, then you know it has some sequences involving policemen fighting crime and a gut-wrenching loss that are a bit more intense than in their previous films.  I agree with some other reviews I read, however, which note that the storyline gets a little convoluted with lots of sub-stories spun out but not fully developed.  The main plot is about fatherhood, but it also throws in grieving the death of a child, gang violence, drug abuse, dating, immigrants pursuing the American dream, police corruption, business ethics, marriage, multiculturalism, etc.  Again, so many sub-stories make it come off a bit disjointed and lacking focus.
The main issues I have with the film, however, are with some of the practical theological and spiritual messages (surprise!).  For one thing it seems to me that the Kendrick view on fatherhood has been influenced by the patriarchal outlook of Vision Forum, et al.  I have noticed that the Kendricks have recently been involved in Doug Philip’s annual film festival in San Antonio, Texas, and my guess is that some Vision Forum influence has rubbed off.  Though I agree with the distinct Biblical role of men in the family, the patriarchal outlook sometimes emphasizes the role of the father to the exclusion of other significant Biblical emphases, like the role of the mother and the partnership between both father and mother in parenting, the role of the church and her officers in spiritual formation, and most importantly the subordination of all family relationships to the supremacy of Christ himself.  Fatherhood or the family can become a golden calf just like everything else.
It is in the area of ecclesiology, however, that “Courageous” may come up shortest.  Though the film ends with the main character giving an impassioned (lay) testimony on fatherhood during a special Father’s Day worship service, the role of the church and her officers in evangelism and discipleship are largely lacking in the film.  There is one scene where a pastor offers grief counseling, but spiritual growth for the fictional characters comes primarily through the unofficial men’s “small group” that develops among the officers and their Hispanic friend.  Evangelism happens when an older Christian policeman shares his beliefs privately with a younger non-Christian policeman, rather than through the preaching of the gospel in the gathered church.  All this has a very contemporary broad-evangelical feel to it.
The film also suggests several non-Biblical ceremonies.  A father takes his daughter out to dinner and gives her a ring betokening her promise of purity till given to her father-approved husband in marriage.  This hints at both the influence of Vision Forum and the Southern Baptist “True Love Waits” campaign.  The men also have a special ceremony to read and affirm the fatherhood resolution.  Added to these ceremonies is the not so subtle suggestion that spiritual advancement must be accompanied by emotionalism.  From a Biblically regulated perspective on the Christian life, the main question we must ask is, “Why do we need to add non-biblical ordinances and ceremonies to what Scripture already supplies?”  If a man becomes a Christian he should confess his faith in public baptism.  If he fails and falters in some spiritual aspect of his life (and he will), like fatherhood (or anything else), then he may examine his life and renew his baptismal vows in the regular partaking of the Lord’s Supper.  There is no depiction of the Biblically ordained dramas of baptism and the Lord’s Supper in “Courageous.”


OK, I can hear some of you saying what my family sometimes does, “Jeff (or, Dad), can’t we just enjoy the wholesome entertainment and recreational values of this film, without going all Reformed-regulative principle-theological on it?”  Sure.  This film is so much better than the regular Hollywood fare.  Enjoy it.  But, on the other hand, don’t forget about those subtle and not so subtle spiritual issues.  “Christian” films are no more neutral than are Hollywood ones.
JTR
Posted by Jeffrey T. Riddle at 9:43 PM

Labels: Video of the Week

Thank you for the Reformed-regulative principle-theological review brother. You make some excellent observations.

I must add a small criticism on the emotional aspect of the film: I enjoyed the flick, but it wore me out emotionally. I would be balling like a baby one minute, and before I could blow my nose and wipe my face, I was laughing uncontrollably. This emotional roller coaster wore on for two hours. My wife and I really enjoyed the movie but it was draining, phew!

When I saw the film with my family, I saw the “sub plots” supporting the complexity of how a father is a “person” besides being a father, and thus dealing with many difficult decisions each day as well as determining “who am I.” That makes a significant impact on me because it shows me that the writers realize this is not an easy task. I wouldn’t have even seen the film had it not bee featured on Dish Online as a PPV streaming movie. It seemed appropriate for our ages represented, and so I rented it. I was so moved by the movie I made some decisions for how to be a better father, and I ended up putting a thank you letter in the suggestion box at my employer, Dish’s headquarters. By the way, I’m glad I’m not the only man to admit he cried.