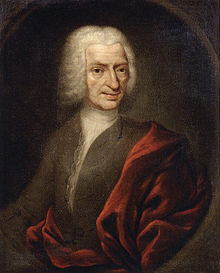 Image:  Hermann Samuel Reimarus (1694-1768).  Reimarus was a noted German Enlightenment scholar.  After his death various unpublished writings (Reimarus's Fragments) were put in print which questioned orthodox confessional views on the deity of Christ and set the course for various scholarly "quests" to uncover "the historical Jesus" in contrast to "the Christ of faith."
In his discussion of Christology in The Christian Faith, Michael Horton provides some interesting critiques of historical-critical methodology arising out of liberal Protestantism (particularly in Germany).  At one point, for example, he notes:
“The liberal trajectory leading from Reimarus’s Fragments to D. F. Strauss’s Life of Jesus and Adolf von Harnack’s Essence of Christianity is essentially Arian (or Adoptionistic)” (p. 465).
Horton later notes how this trajectory continues in modern liberal theology:
“Much of late modern theology (liberal, existential, liberationist) is, in tendency at least, Socinian.  That is, it assumes, a Unitarian view of God, a Pelagian view of human moral ability, and therefore an Arian reduction of Christ to a moral example and/or a Gnostic separation between the Jesus of history (who remains dead) and a Christ of faith (who never died and therefore can offer spiritual enlightenment)” (p. 481).
In reading these kinds of remarks it struck me that Horton’s point on how Arian tendencies in modern liberal theology led to the undermining and denial of orthodox Christology might also be applied to Biblical textual issues.  Modern text critics typically consider traditional text readings which reflect high Christology to be “late,” “secondary,” “harmonistic,” and “pious”; whereas, readings that downgrade explicitly high Christological viewpoints are typically considered more “primitive” and closer to the “original.”  For an example of this see my recent discussion of the text of Romans 14:10 where the modern critical text prefers “the judgment seat of God” to the traditional text’s “the judgment seat of Christ.”
It continues to surprise me that conservative and Reformed evangelicals (like Horton, though he might not be too pleased with being labeled an “evangelical”) are very keen (rightly!) to point out the bias of modern liberalism in doctrinal areas like Christology, but they seem blind to the fact that these same influences were and are at work in the undermining of the traditional Reformed text of Scripture.  Can they at least entertain the possibility that the same liberal scholars who argued for an Arian Christ in the New Testament just might have also been interested in reconstructing a critical edition of the New Testament that reflects their Christological  perspective?
JTR
Posted by Jeffrey T. Riddle at 9:56 AM