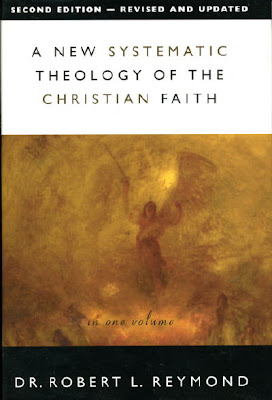 In preaching through Romans 7 I adopted the “Augustinian” view that Paul is describing himself as a mature Christian man who continues to struggle with sin. In Appendix F (“Whom Does the Man in Romans 7:14-25 Represent?” pp. 1127-1132) in his A New Systematic Theology (Thomas Nelson, 1998), Robert Reymond, however, departs from the Augustinian position.
While acknowledging that “many of the ablest expositors … believe that Paul intended Romans 7:14-25 as description of the Christian in his struggle against the power of indwelling sin” (e.g., Calvin, Hodge, Murray, MacArthur), Reymond suggests that “the Romans passage is not a description of the regenerate person’s struggle against indwelling sin” (p. 1127). Among those who share his view he cites J. A. Bengel, W. Sanday and A. C. Headlam, J. Oliver Buswell, Jr., A. Hoeksma, and D. Martyn Lloyd-Jones. Reymond sees Paul drawing on his previous unregenerate state in Romans 7 to set forth “the impotence of the unregenerate ego to do good against the power of indwelling sin” and the “inability” and “weakness” of the law “due to human depravity to deliver the unregenerate ego from sin’s slavery” (p. 1127).
He borrows from Herman Ridderbos here (without accepting Ridderbos’ notion that the “I” in Romans 7 represents OT Israel rather than Paul’s autobiographical experience).
Here are 10 points Reymond makes in defending his position:
1. Romans 7:7-13 is clearly autobiographical as is 7:14-25.
2. To be “carnal” would be to be in a state of spiritual death (7:14).
3. Only an unregenerate man could be described as “sold as a slave to sin” (7:14).
4. This man is mastered by indwelling sin (vv. 17, 20), and this cannot be true of the Christian who has the indwelling Spirit.
5. The man says no good thing dwells in him (v. 18), and this can’t be true of the man who has God’s Spirit in him.
6. This man says sin has taken him prisoner (v. 23) which is not true of a Christian (6:14).
7. This man declares himself “wretched” (v. 24). “This is not true of the Christian nor can this be descriptive of the Christian” (p. 1129).
8. Advocates of the Augustinian view say a non-believer could not delight in the law (v. 22), but Reymond says the unconverted Saul did just this!
9. Romans 7:25 b does not describe the Christian’s state.
10. The man here is utterly defeated by indwelling sin. “This is not true of the Christian” who may struggle with sin (Gal 5:16-18) but is victorious “because of his new master, the indwelling Spirit of Christ” (p. 1130).
Reymond adds that the Augustinian view has sometimes undergirded the “carnal Christian” theology and that it is generally appealed to by antinomians. Better, he concludes, to think that Paul is describing himself in Romans 7 in his state before conversion.
JTR Response: I still hold that the Augustinian interpretation prevails. Reymond admits that Paul teaches the Christian life holds struggles (see his appeal to Galatians 5:16-18). Romans 7 affirms this. When Paul says that nothing good dwells in him (v. 18) he stresses that this is “in his flesh (sarx),” which would not exclude the presence of the indwelling Spirit. Reymond undervalues Paul’s expression of sensitivity to sin as a mature Christian (v. 24). He also disregards the role of the thanksgiving in v. 25, even suggesting that it is an ad hoc interjection by the regenerate Paul in the midst of his description of his unregenerate experience (p. 1129)! I am more persuaded by John Murray’s five reasons to take Romans 7:14-15 as Paul’s reflections on his experience as a mature Christian (see my prevous post). That this interpretation could be abused by antinomians does not mean that it should be cast off. Paul certainly dealt with this kind of misinterpretation first hand (see Romans 6:1-2).
JTR
Posted by Jeffrey T. Riddle at 10:14 AM

Great posts and reflections on a very powerful passage. I find myself in agreement with you and Murray. Furthermore, I find this text to be one of the most encouraging texts to me - a believer who battles daily to mortify sin, to not allow sin to reign in my members. Most encouraging to hear Paul tell us of the hope we have in Christ, to one day be delivered from the "body of this death".

‘THE FAINTING WARRIOR. NO. 235 DELIVERED ON SABBATH MORNING JANUARY 23, 1859,
BY THE REV. C. H. SPURGEON, AT THE MUSIC HALL, ROYAL SURREY GARDENS.
“O wretched man that I am I who shall deliver me from the body of this death? I thank God, through Jesus Christ our Lord.” — Romans 7:24,25.

‘Some have affirmed that he is merely declaring what he was
before conversion, and not what he was when he became the recipient of
the grace of God. But such persons are evidently mistaken, and I believe wilfully mistaken; for any ample-hearted, candid mind, reading through this chapter, could not fall into such an error. It is Paul the apostle, who was
not less than the very greatest of the apostles — it is Paul, the mighty servant of God, a very prince in Israel, one of the King’s mighty men — it
is Paul, the saint and the apostle, who here exclaims, “O wretched man that I am!”

Sorry, but the Augustinian view is INCORRECT. Quit trying to interpret this passage according to your "experience" and interpret it exegetically according to the context. From Romans 6 through 8 Paul asks 4 rhetorical questions, gives a strong denial, and then explains the reality. In verse 13 he asks his 4th rhetorical question. He DOES NOT answer this in the same verse and then switch gears to talk about something totally unrelated.
Furthermore, Pay attention to EXACTLY what Paul teaches in Romans 6 AND 8. The Augustinian view of Romans 7 contradicts this, as well as the rest of Scripture and what we know of Paul when chained to elite guards 24 hours a day. If Paul, as a Christian, was NOT doing the good he wanted to do but only doing the evil he did not want to do, then he COULD NOT write to Christians and tell them "imitate me" or "what you see and hear in me, do." When he would be telling other Christians what to do, the elite guard would have looked at him as a hypocrite and NONE of them would have been converted by him. ALL the facts and evidence of Paul's life and of New Testament Scripture contradict the Augustinian view.
The grammar of the Greek text alone in this passage eliminate the false interpretation that this passage is talking about Paul as a Christian. In two different verses, Paul says, "I DO NOT practice good," and "I ONLY practice evil." NOT a Christian. The word "sold" (as a slave is sold) means "entirely under the control of the love of sinning" [Thayer's].
Your opinions and "feelings" DO NOT matter. DO NOT interpret Scripture based upon your experience. Yes, the Christian faces struggles, but, NO, this passage is NOT exegetically about a Christian. It is about a man in relation to the Law.
See Charles Leiter, J. Oliver Buswell, Anthony Hoekema, Herman Ridderbos, Martyn Lloyd-Jones, etc.

Says anonymous!? Oh the beauty of Christ's Lordship! Though one might believe as anonymous, he still lives the experience of Romans 7!