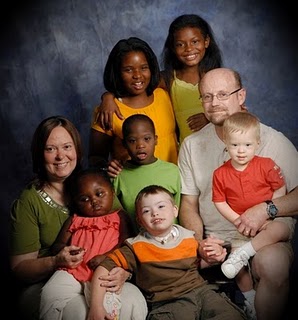 Image:  The Carr family of Iowa, a Christian family that has grown through adoption.
Many Christians are rediscovering both the doctrine of adoption and the practice of adoption.  In Watson's exposition of the promise given to peacemakers that "they shall be called the children of God," he describes how the saints are adopted by the Lord.  He then adds, however, this short section which offers four comparisons and contrasts between God's adoption and man's (emphasis added):
How do God’s adopting and man's adopting differ?
1.  Man adopts to supply a defect, because he has no children of his own, but God does not adopt upon this account. He had a Son of his own, the Lord Jesus. He was his natural Son and the Son of his love, testified by a voice from heaven, 'This is my beloved Son’ (Matthew 3: 17). Never was there any Son so like the Father. He was his exact effigy, 'the express image of his person’ (Hebrews 1: 3). He was such a Son as was worth more than all the angels in heaven: 'Being made so much better than the angels’ (Hebrews 1:4); so that God adopts not out of necessity, but pity.
2.  When a man adopts, he adopts but one heir, but God adopts many: 'In bringing many sons to glory’ (Hebrews 2: 10). Oh may a poor trembling Christian say, Why should I ever look for this privilege to be a child of God! It is true, if God did act as a man, if he adopted only one son, then you might despair. But he adopts millions. He brings 'many sons to glory’. Indeed this may be the reason why a man adopts but one, because he does not have enough estate for more. If he should adopt many his land would not hold out. But God has enough land to give to all his children. 'In my Father's house are many mansions' (John 14: 2).
3.  Man when he adopts does it with ease. It is but sealing a deed and the thing is done. But when God adopts, it puts him to a far greater expense. It sets his wisdom on work to find out a way to adopt us. It was no easy thing to reconcile hell and heaven, to make the children of wrath the children of the promise; and when God in his infinite wisdom had found out a way, it was no easy way. It cost God the death of his natural Son, to make us his adopted sons. When God was about to constitute us sons and heirs, he could not seal the deed but by the blood of his own Son. It did not cost God so much to make us creatures as to make us sons. To make us creatures cost but the speaking of a word. To make us sons cost the effusion of blood.
4.  Man, when he adopts, settles but earthly privileges upon his heir, but God settles heavenly privileges justification, glorification. Men but entail their land upon the persons they adopt. God does more. He not only entails his land upon his children, but he entails himself upon them. 'I will be their God' (Hebrews 8: 10). Not only heaven is their portion, but God is their portion.
God's filiating or making of children is by infusion of grace. When God makes any his children he stamps his image upon them. This is more than any man living can do. He may adopt another, but he cannot alter his disposition. If he be of a morose rugged nature, he cannot alter it; but God in making of children fits them for son-ship. He prepares and sanctifies them for this privilege. He changes their disposition. He files off the ruggedness of their nature. He makes them not only sons, but saints. They are of another spirit (Numbers 14: 24). They become meek and humble. They are 'partakers of the divine nature’ (2 Peter 1:4).