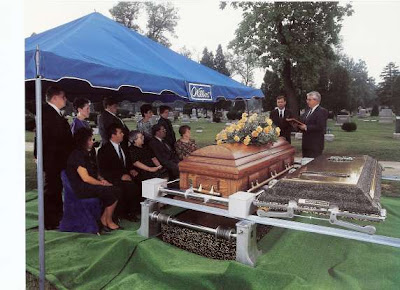 In the January 2011 issue of "The Messenger" the monthly newsletter of Emmanuel Reformed Church in Salisbury, England, Pastor Malcolm Watts has a thoughtful essay on whether Christians should choose burial or cremation.  This is a topic that is largely ignored by the evangelical church today.  As the Christian influence on our society wanes, we are seeing fewer burial services and more and more cremations.  The last time I did a local funeral service, one of the funeral home attendants noted that they are doing fewer and fewer services with the body of the deceased present. He also noted that one of the local conservative Catholic churches had taken a stand on the matter (I don't recall whether he said the priest would not participate in cremation services or would not allow them to take place in the church).  My guess is that few, if any, of the evangelical or Protestant churches have given it much thought.  Watts' essay can be laid aside the Banner of Truth booklet Burial or Cremation:  Does it Matter? by Donald Howard as a helpful resources on this topic.  Here is Watts' article (with British spellings):
Burial or Cremation?