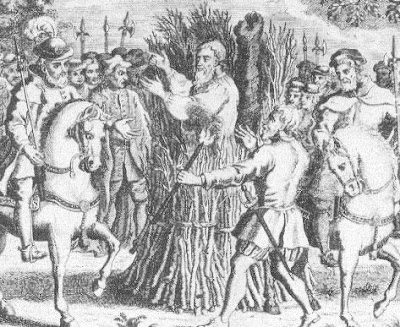 Image:  Depiction of the martyrdom of Rowland Taylor, February 9, 1555.
I got the latest issue of the TBS’s Quarterly Record (January-March 2011) in the mail today. This issue has an article by C. P. Hallihan that profiles the life of John Bois (also spelled “Boys”), the Puritan minister who was one of the AV translators (pp. 22-31). The article notes that John Bois (1561-1644) was born near Hadleigh, Suffolk in the third year of Elizabeth’s reign into a “mature Protestant family.” His father, William Bois, was a godly minister who had come under the influence of Rowland Taylor, a Marian martyr burned at the stake on February 9, 1555 on the local common in Hadleigh. John Bois’ mother Mirabel was also a virtuous and godly woman who was said to have read through the Bible twelve times and the Book of Martyrs twice, “besides other books not a few.”
It is little surprise then that John Bois was steeped in the Scriptures at an early age. It is said that he could read and write Hebrew at age six! At age fourteen he began studies at St. John’s College, Cambridge and showed such competence in Greek that he completed the normal three year progression in six weeks! In 1588 he was ordained to the ministry and took up service at a congregation at Boxworth, Cambridgeshire.
In 1604 Bois was invited to join in the AV translation team on the 2nd Cambridge Committee that translated the Apocrypha. He also helped with the 1st Cambridge Committee that translated 2 Chronicles to Song of Solomon. He was then part of the final revision committee for the translation that met at Stationer’s Hall. He died at age eighty-three years on January 14, 1644 after a long and fruitful ministry.
One anecdote, in particular, stood out in the article. It is said that as a boy Bois had to walk two miles each way to a school in Hadleigh. One of his biographers points out that “the stake where Rowland Taylor was burnt would have been visible on that walk twice a day.” It’s only a speculation, but what impact did it have on the young Bois to walk twice each day past a place where Rowland had died as a martyr? A 16th century marker erected on the spot has this inscription: “1555-D-Tayler-In-Defending-That-Was-Good-At-This-Plas-Left-His-Blode.”
JTR
Posted by Jeffrey T. Riddle at 9:40 PM

What evidence do you have that Bois was a Puritan? Remember Bancroft had the major hand in choosing Translators and would have kept off all but the most eminent Puritans. Bois was undoubtedly a great linguist, but eminent he was not.

I am admittedly relying on secondary sources here for the evidence that Boys was both a Puritan and competent linguist.

For his skills as a linguist, see works on the AV by A. McGrath, Adam Nicolson, and the QR article on Boy.

I have not (yet) read his work directly. A large collection of his writings was published by Soli Deo Gloria in 1997 ("The Works of John Boys"; you can find it on Amazon) and it is distributed by Reformation Heritage Books. My guess is that SDG would not have published it if it was not soundly Reformed. What evidence do you have that Boys was not Puritan (admitedly a broad description, covering everyone from Richard Baxter to Benjamin Keach to John Owen) or not a gifted linguist?