Hanging Out With Jerry 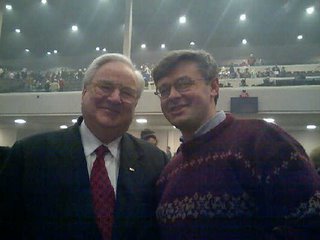 Been meaning to post this picture of me and Jerry Falwell taken by my friend Sheri on her cell phone. My family was invited to go with a couple of other JPBC families to Thomas Road BC's Christmas program "spectacular" (deserving of another post in its own right) back on December 8th. Jerry was up front after the program, so I chatted with him for a moment. It might surprise some to know that he was oblivious to the whole Albemarle Co. Pagan flyer broo-ha-ha. When I asked what he thought of the fact that the School Board was allowing pagan flyers as well as Christian ones, he responded: "That's fine with me, as long as they allow Christians to do the same. Let our ideas compete with theirs. Ours are based on the truth, and we will win out in the end."
JTR
Posted by Jeffrey T. Riddle at 4:05 PM

You've found a speaker for the next Evangelical Forum!

You posing with Uncle Jerry just cracks me up.

If he and I could only get this whole Calvinism-Arminianism thing worked out between us....

I think you should use this picture on Evangelical Forum promotional literature!