Jefferson, Calvinism, and the Roots of American Religious Liberty 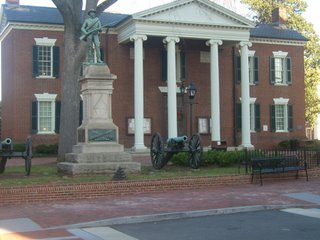 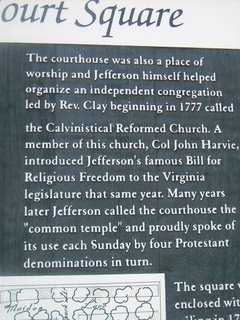 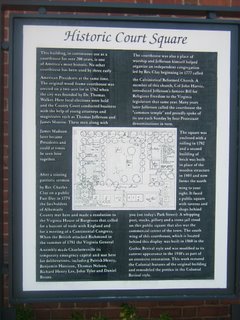 Some more thoughts churned up by the comments posted on Pagan Evangelism. In that conversation, I made the following comment: "By the way, how do we think our nation arrived at this position where there is freedom of religious expression? It came through the influence of Christians in the nation's founding." I immediately received a number of reprimands. Here are a few:

Those who live in Charlottesville might appreciate taking a stroll through Court Square and reading the historic marker there which notes Thomas Jefferson’s role in the 1777 organization of a "Calvinistical Reformed Church" led by Rev. Charles Clay and meeting in the County Courthouse. Notice also that it was a member of this Calvinistic congregation, Col. John Harvie, who introduced Jefferson’s Bill for Religious Freedom in the Virginia Legislature in 1777. Note also how Jefferson referred to the Courthouse as a "common temple" and was proud of its use each Sunday by no less than four Protestant churches in turn.

For more photos from Charlottesville’s Court Square, check out this photo album.

Is this the same Jefferson which also said "The whole history of these books [the Gospels] is so defective and doubtful that it seems vain to attempt minute enquiry into it: and such tricks have been played with their text, and with the texts of other books relating to them, that we have a right, from that cause, to entertain much doubt what parts of them are genuine. In the New Testament there is internal evidence that parts of it have proceeded from an extraordinary man; and that other parts are of the fabric of very inferior minds. It is as easy to separate those parts, as to pick out diamonds from dunghills." -Thomas Jefferson, letter to John Adams, January 24, 1814

He was hardly the good "committed, Scripture saturated Christian" that you make him out to be. After all, if Catholics aren't Christian (as you've claimed in other blog entries) then certainly Jefferson's radical beliefs, which denied the divinity of Jesus, certainly shouldn't qualify as Christian either.

I am not claiming that Jefferson was a Christian. No doubt, he was not, and, as you rightly point out, his cut-and-paste Bible demonstrates his rejection of Scripture's authority.

My point is that Jefferson was influenced by (and had influence upon) evangelical Christians (like the Rev. Clay and Col.Harvie from the "Calvinistical" Church). Further, it was the largely Protestant (not Deist) citizenry who gave us the foundation of religious liberty. These are the committed, Scripture soaked believers of whom I wrote (not Jefferson!).

Is the Rev Charles Clay the same Charles Clay who was born 1715 and died 1789 and was married to Martha Green?
Thank you!
Laura Clay Ballard

I don't know the answer to that one. I was just going on the info posted on the historical markers at the Courthouse. I'd love to know more about Clay and the "Calvinistical" church that met at the Courthouse.