The Excellency of Christ 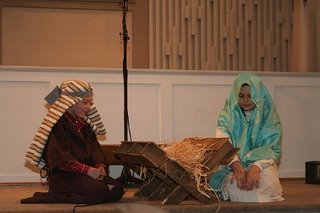 Jonathan Edwards (1703-58) is perhaps best known for his sermon, "Sinners in the Hands of an Angry God," but I recently read another message of his titled, "The Excellency of Christ" (read the whole message here) in which the renowned preacher of the Great Awakening reflects on the meekness and majesty of Christ as expressed in his birth:
And though his infinite condescension thus appeared in the manner of his incarnation, yet his divine dignity also appeared in it; for though he was conceived in the womb of a poor virgin, yet he was conceived there by the power of the Holy Ghost. And his divine dignity also appeared in the holiness of his conception and birth. Though he was conceived in the womb of one of the corrupt race of mankind, yet he was conceived and born without sin; as the angel said to the blessed Virgin, Luke 1:35. "The Holy Ghost shall come upon thee, and the power of the Highest shall overshadow thee, therefore also that holy thing which shall be born of thee, shall be called the Son of God."
His infinite condescension marvelously appeared in the manner of his birth. He was brought forth in a stable because there was no room for them in the inn. The inn was taken up by others, that were looked upon as persons of greater account. The Blessed Virgin, being poor and despised, was turned or shut out. Though she was in such necessitous circumstances, yet those that counted themselves her betters would not give place to her; and therefore, in the time of her travail, she was forced to betake herself to a stable; and when the child was born, it was wrapped in swaddling clothes, and laid in a manger. There Christ lay a little infant, and there he eminently appeared as a lamb.
But yet this feeble infant, born thus in a stable, and laid in a manger, was born to conquer and triumph over Satan, that roaring lion. He came to subdue the mighty powers of darkness, and make a show of them openly, and so to restore peace on earth, and to manifest God's good-will towards men, and to bring glory to God in the highest, according as the end of his birth was declared by the joyful songs of the glorious hosts of angels appearing to the shepherds at the same time that the infant lay in the manger; whereby his divine dignity was manifested.
Merry Christmas!
In the Lamb, Pastor Jeff Riddle
Posted by Jeffrey T. Riddle at 10:12 AM