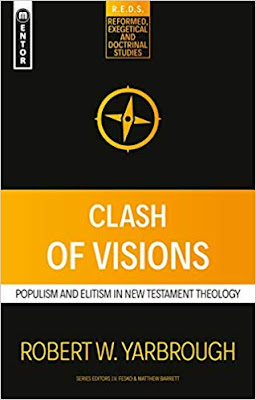 In this episode I offer an audio version of a draft review I have written of:

Here are the opening and closing paragraphs:

Yarbrough is a seasoned evangelical academic scholar, who, among other significant contributions, is well known for his translations of several important works by evangelical German authors (like Eta Linnemann, Gerhard Maier, and others) for English-speaking audiences. This brief book is an expansion of the author’s 2018 Gheens Lectures at the Southern Baptist Theological Seminary. In this work Yarbrough reflects on the “clash of visions” between the popular (traditional) Christian’s approach to Scripture and that of the elite (academic) scholar.....

Yarbrough’s work is thought-provoking. It offers valuable reflections on the inevitable disconnect or “clash” which results from embracing Enlightenment methods of academic study, while also affirming the inspiration and authority of the Bible. This comes from a scholar uniquely situated to offer such a critique, given his training and expertise in the historical critical method, his awareness of the worldwide Christian movement, and his personal evangelical convictions. Like those whose works he has previously translated (e.g., Linnemann and Maier) Yarbrough offers his own compelling and insightful evaluation of the “clash” between “elitist” scholarship and “populist” faith.