Eusebius, EH.5.18: Apollonius Against the Montanists 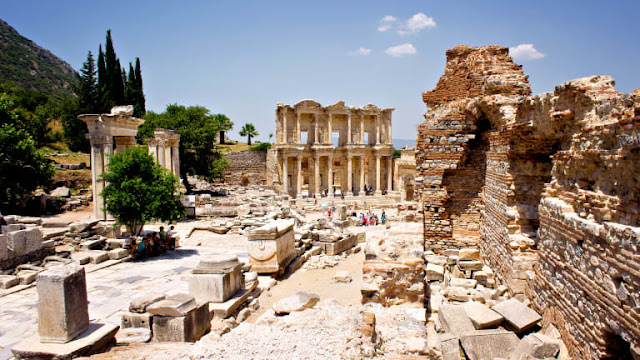 Image: Ruins of ancient Ephesus. Some early traditions [though not Eusebius] say that the anti-Montanist writer Apollonius had been bishop of Ephesus.

Another episode is posted to the occasional series of readings from and brief notes and commentary upon Eusebius of Caesarea’s The Ecclesiastical History. Here is Book 5, chapter 18. Listen here.

This chapter concerns the writings of Apollonius, “a writer of the church [ekklesiastikos syngrapheus],” against the Montanist heresy.

He is quoted as attacking the teaching of Montanus, which included the following: the annulment of marriage, the enactment of fasts, setting up two small towns (Pepuza and Tymion) as “Jerusalem”; and various financial irregularities.

He also notes that the prophetesses deserted their husbands once they were “filled with the spirit”, though Priscilla falsely claimed to be a “virgin” (Did she mean this in a “spiritual” sense?). She is also accused of taking silver, and gold, and expensive clothing from her followers.

He then attacks two Montanist adherents. First, Themiso claimed to be a “martyr [witness]”, who wrote a spurious Montanist epistle, “in imitation of the apostle” [by “the apostle” he presumably means Paul]. Second, he mentions Alexander, described as a charlatan, who joined the prophetess in revelry. He exhorts his readers to test the fruit of prophets, and notes that Alexander was arrested not for being a Christian but as a criminal.

As a guide for testing the fruit of a true prophet, he offers the following questions:
“Tell me, does a prophet dye his hair? Does he pencil his eyelids? Does he love ornaments? Does he gamble and dice? Does he lend money?”

Other details are added about Apollonius, including his claim to have written 40 years after Montanus began his teaching, his mention of Zoticus of Pepuza as a faithful elder who had attempted to oppose Maximilla, and his mention of the martyr Thraseus, his claim that Christ ordered the apostles to stay in Jerusalem for 12 years, and his quotations from Revelation. He also conveyed an account of John the apostle raising a man from the dead in Ephesus.

This chapter provides important information about the Montanist heresy and how the early orthodox opposed it. It also tells us about an early Christian apologetic writer, Apollonius, who wrote against Montanism. The Montanists are attacked, in particular, as money-grubbing charlatans. Exhortation is offered to the orthodox to be discerning and to “test the fruits” of the so-called “prophets.”