Book Note: Gregory of Nyssa's The Life of Moses: Part 4 of 4 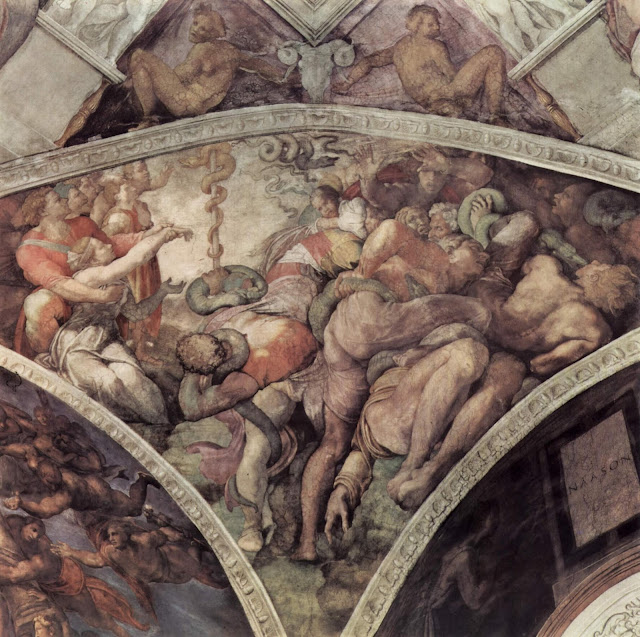 Image: Michelangelo's depiction of the brazen serpent in the Sistine Chapel (c. 1508-1512)

Regarding the spies, the bunch of grapes “suspended from the wood … signifies the saving Passion” (115).

The raising of the brazen serpent also points forward to the cross. “To look to the cross means to render one’s whole life dead and crucified to the world, unmoved by evil” (116).

After asserting that “sin is the real serpent”, he adds, “Man, then, is freed from sin through him who assumed the form of sin and became like us who had been turned into the form of the serpent” (116-117).

Christ “keeps the bites from causing death, but the beasts themselves are not destroyed” (117). “In fact, the gnawings of desire are frequently active even in the faithful” (117).

Those who seek to “punish the passion of desires by living a disciplined life …. thrust themselves into the priesthood” (117).

To purify the passions is to “cross through the foreign life”, as the law leads one “along the royal highway” (120).

Gregory’s discussion of virtue and vice, reflects the influence of Aristotle and his “golden mean.”

According to Gregory, “all evil naturally operates in a deficiency or an excess of virtue. In the case of courage, cowardice is the lack of virtue, and rashness is its excess. What is pure of each of these is seen to lie between these corresponding evils and is a virtue. In the same way all other things which strive for the better also somehow take the middle road between the neighboring evils” (121).

“The person who lacks moderation is a libertine, and he who goes beyond moderation has his conscience branded, as the Apostle says” (121).

In his discussion of the daughters of Moab, Gregory discusses the use of pleasure to entice evil:

“Pleasure is truly like evil’s bait; when it is thrown out lightly, it draws gluttonous souls to the fishhook of destruction” (124).

Of the many passions “which afflict men’s thinking there is none so strong as the disease of pleasure” (125). Pleasure “is an enemy of ours that is hard to fight and difficult to overcome” (125).

The “irrational animal impulse to licentiousness” made the sinful Israelites of old “forget their human nature” (125).

He concludes, “For the evils of the passions, like a plague, when once they have gained possession of the critical parts, stop only at death” (126).

The mature Christian seeks “the end of the virtuous life” (129). For believers, there is “one purpose in life: to be called servants of God by virtue of the lives we live” (130).

In his concluding words to “Ceasarius, man of God” Gregory notes his attempt to trace “in outline like a pattern of beauty the life of the great Moses, so that each of us might copy the image of the beauty which has been shown to us by imitating his way of life” (131).

Final Thoughts on Gregory of Nyssa’s The Life of Moses:

Gregory of Nyssa, along with his fellow Cappadocians, was a key early articulator and defender of orthodox Trinitarian theology.

In other areas, however, one might challenge some of Gregory’s views. in recent days, for example, David Bentley Hart has appealed to Gregory and other early Christian thinkers (like Origen) to support universalism.

In this work, as noted, Gregory seems significantly to depart from the apostle Paul’s anthropology, hamartiology, and soteriology.

What checks do we have on allegorical interpretations when they are made by uninspired men? Is this not what the Reformers were adressing when they revived a literal, grammatical-historical method (see, e.g., the method used by Calvin in his commentaries)?

Nevertheless, Gregory’s emphasis on the end or goal of Scripture study as the spiritual development of the Christian virtues is refreshing.