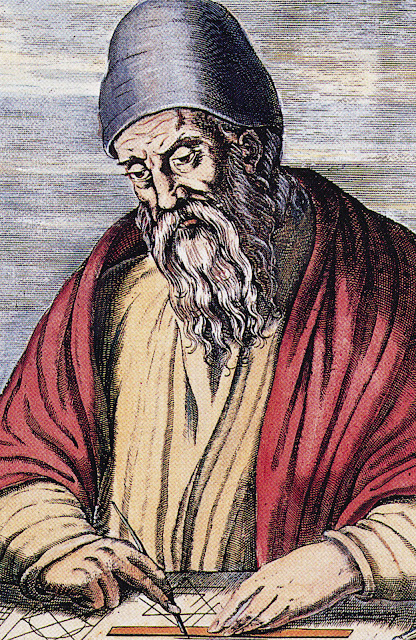 Image: Woodcut of the Greek philosopher Euclid (c. 300 BC). At the close of Book 5 in the EH, Eusebius denounces those who import Greek learning, including the geometry of Euclid, into their study of Scripture.

This is an occasional series of readings from and brief notes and commentary upon Eusebius of Caesarea’s The Ecclesiastical History: Book 5, chapters 26-28. Listen here.

These three chapters bring Book 5 of the EH to conclusion.

Chapters 26-27 provides a summary of various orthodox writers and writings.

Mention is made of Irenaeus’s treatise against the Greeks, titled Concerning Knowledge, and his Demonstration of the Apostolic Preaching, among others.

The imperial transition from Commodus to Severus is also noted.

More orthodox writers are surveyed. These include:

Hereclitus on the Epistles [Lake notes: literally, “On the Apostle”, meaning a study of Paul’s letters];
Maximus on the problem of the source of evil and on the origin of matter;
Candidus on the Hexaëmeron (the six-day creation), as well as Apion on the same subject;
Sextus on the resurrection;
A treatise by Ariabanus, and countless other works, including, Eusebius notes, the writings of many anonymous early authors.

Chapter 28 begins with a discussion of a treatise written by one of the anonymous orthodox writers against the heresy of Artemon, which consisted of a denial of the deity of Christ. Eusebius notes that this heresy was being revived in his day by Paul of Samosata.

This heresy made a historical argument against orthodoxy, saying that Christ deity only began to be taught during the Roman bishopric of Zephyrinus, who followed Victor.
Eusebius points out that this argument is faulty since the apostles and the earliest Christian authors (including Justin, Clement, Irenaeus, and Melito) all affirmed Christ’s deity.

The founder of this movement is identified as Theodotus the cobbler, who was excommunicated by Victor.

Several other anecdotes from the anti-Artemon treatise are shared, including an account of a man named Natalius who was deceived by the disciples of Theodotus the cobbler. This Natalius was seduced to become a “bishop” in this sect when offered a large salary, but he was warned against this sect in visions and even scourged all night long by holy angels, until he repented before Zephyrinus and was restored.

The same treatise notes how those in this sect were not afraid “to corrupt the divine Scriptures.” They apparently tried to use Greek learning, even the geometry of Euclid, and Greek philosophy to “correct” Scripture.

An evidence of their error was that they could not produce”originals [antigrapha] from which they had made their copies [metagrapho].”

One of the marks of their error was that their teachings did not agree with one another.

Book five ends with another record of the ongoing conflict between orthodox, right-believing Christianity and heterodox teaching, like that of this Artemon heresy and its denial of Christ’s deity. Orthodox Christian writers are raised up in each generation to denounce such movements and to defend the unified and true faith. So, Eusebius continues his triumphalist record of early Christianity.